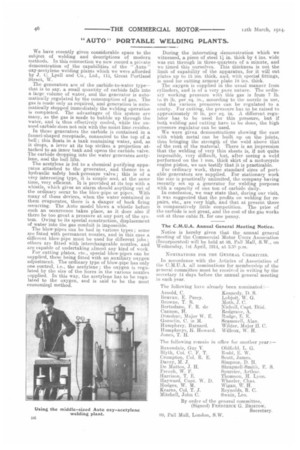 We have recently given considerable space to the subject of welding and descriptions of modern methods. In this connection we now record a private demonstration of the capabilities of the " Auto" oxy-acetylene welding plants which we were afforded by J. C. Lyell and Co., Ltd., 113, Great Portland Street, W.

The generators are of the carbide-to-water type— that is to say, a small quantity of carbide falls into a large volume of water, and the generator is automatically regulated by the consumption of gas. The gas is made only as required, and generation is automatically stopped immediately the welding operation is completed. The advantages of this system are many, as the gas is made to bubble up through the water, and is thus effectively cooled, while the unused carbide does not mix with the moist lime residue.

In these generators the carbide is contained in a funnel-shaped receptacle, connected to the top of a. bell ; this floats in a tank containing water, and, as it drops, a lever at its top strikes a projection attached to an inner tank and opens the carbide valve. The carbide dropping into the water generates acetylene, and the bell lifts.

The acetylene is led to a chemical purifying apparatus attached to the generator, and thence to a hydraulic safety back-pressure valve ; this is of a very interesting type, it is simple and, at the same time, very efficient. It is provided at its top with a whistle, which gives an alarm should anything out of the ordinary occur to the blow-pipe or pipes.. With many of these devices, when the water contained in them evaporates, there is a. danger of back firing occurring. The Auto model blows a whistle before such an occurrence takes place, as it does also if there be too great a pressure at any part of the system_ Owing to its special construction, displacement of water into the gas conduit is impossible.

The blow-pipes can be had in various types ; some are fitted with permanent nozzles, and in this case a different blow-pipe must be used for different jobs ; others are fitted with interchangeable nozzles, and are capable of undertaking almost any kind of work. For cutting plates, etc., special blow-pipes can be supplied, these being fitted with an auxiliary oxygen adjustment. The ordinary type of blow-pipe has only one control, i.e., the acetylene ; the oxygen is regulated by the size of the bores in the various nozzles supplied. In this way, the acetylene has to be regulated to the oxygen, and is said to be the most economical method.

During the interesting demonstration which we witnessed, a piece of steel 11 in. thick by I ins, wide was cut through in three-quarters of a minute, and we timed this ourselves. This thickness is not the limit of capability of the apparatus, for it will cut plates up to 15 ins, thick, and, with special fittings, is used /or cutting armour plate 18 ins. thick. The oxygen is supplied in the usual manner from cylinders, and is of a very pure nature. The ordinary working pressure with this gas is from 7 lb. to 28 lb. per sq. in., according to the nozzle in use, and the various. pressures can be regulated to a nicety. For cutting, the pressure has to be raised to approximately 40 lb. per sq. in. A different regulator has to be used for this pressure, but if both welding and cutting have to be done, the high pressure regulator can be used.

We were given demonstrations showing the ease with which metal can be built up on the joints, thus bringing the strength of the weld above that of the rest of the material. There is an impression that the welding of very thin sheets is, if not quite impossible, very difficult, but, after seeing a weld performed on the 1 mm. thick skirt of a motorcycle engine piston, we can testify that it is practicable.

For ordinary work, three standard sizes of portable :generators are supplied. For stationary work the size is practically unlimited, the company having recently set up a generator for welding purposes with a capacity of one ton of carbide daily.

. In conclusion, we may state that, during our visit, it was suggested that the profits on welding for repairs, etc., are very high, and that at present there is comparatively little competition. The price of the carbide is not great, and the cost of the gas works out at three cubic ft. for one penny.

Notice is hereby given that the annual general meeting of the Commercial Motor Users Association (Incorporated) will be held at 89, Pall Mall, S.W., on Wednesday, 1st April, 1914, at 3.30 p.m.

NOMINATIONS FOR THE GENERAL COMMITTEE.

In accordance with the Articles of Association of the C.M.U.A. all nominations for membership of the general committee muet be received in writing by the secretary 14 days before the annual general meeting in each year.

The following have already been nominated:— Arnold, C.

The following remain in

office for another year:—

By order of the general committee, (Signed) FREDERICK G. BRISTOW,