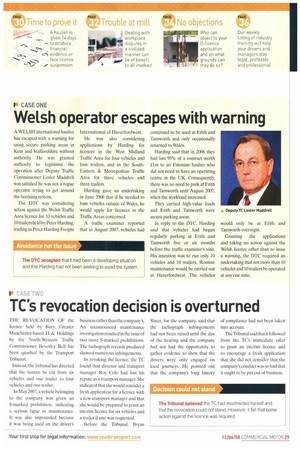 THE REVOCATION OF the licence held by Bury, Greater Manchester-based H & Holdings by the North-Western Traffic Commissioner Beverley Bell has been quashed by the Transport Tribunal.

In May 2007, a vehicle belonging to the company was given an S-marked prohibition, indicating a serious lapse in maintenance, It was also impounded because it was being used on the driver's business rather than the company's. An unannounced maintenance investigation resulted in the issue of two more S-marked prohibitions. The tachograph records produced showed numerous infringements.

Before the Tribunal, Bryan Slater, for the company, said that the tachograph infringements had not been raised until the day of the hearing and the company had not had the opportunity to gather evidence to show that the drivers were only engaged on local journeys. He pointed out that the company's long history of compliance had not been taken into account.

The Tribunal said that it followed from the TC's immediate offer to grant an interim licence and to encourage a fresh application that she did not consider that the company's conduct was so bad that it ought to be put out of business.