So nice to drive 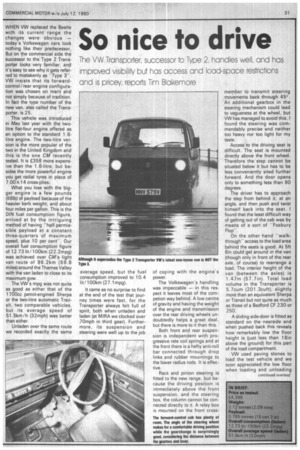 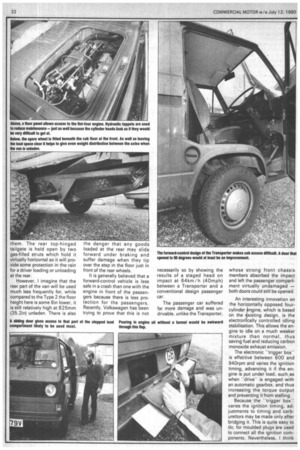 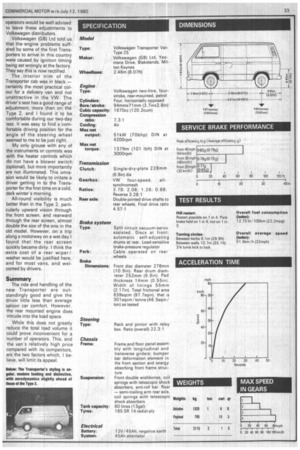 The VW Transporter, successor to Type 2, hand es well, and has improved visibility but has access and load-space restrictions and is pricey, reports Tim Blakemore

WHEN VW replaced the Beetle with its current range the changes were obvious — today's Volkswagen cars look nothing like their predecessor. But on the commercial side the successor to the Type 2 Transporter looks very familiar, and it's easy to see why it gets referred to mistakenly as "Type 3". VW insists that its forwardcontrol / rear engine configuration was chosen on merit and not simply because of tradition. In fact the type number of the new van, also called the Transporter, is 25.

This vehicle was introduced in May last year with the twolitre flat-four engine offered as an option to the standard 1.6litre engine. The two-litre version is the more popular of the two in the United Kingdom and this is the one CM recently tested. It is £358 more expensive than the 1.6-litre, but besides the more powerful engine you get radial tyres in place of 7.00X 14 cross-plies.

What you lose with the bigger engine is a few pounds (661b) of payload because of the heavier kerb weight, and about four miles per gallon. This is the DIN fuel consumption figure, arrived at by the intriguing method of having "half permissible payload at a constant three-quarters of maximum speed, plus 10 per cent". Our overall fuel consumption figure of 12.73 lit/100km (22.2mpg) was achieved over CM's light van route of 96.2km (59.8 miles) around the Thames Valley with the van laden to close to its maximum gvw, The VW's mpg was not quite as good as either that of the 1700cc petrol-engined Sherpa or the two-litre automatic Transit, two comparable vehicles, but its average speed of 51,5km/h (32mph) was better than either.

Unladen over the same route we recorded exactly the same average speed, but the fuel consumption improved to 10.4 lit/100km (27.1mpg).

It came as no surprise to find at the end of the test that journey times were fast, for the Transporter always felt full of spirit, both when unladen and laden (at MIRA we clocked over 70mph in third gear). Furthermore, its suspension and steering were well up to the job of coping with the engine's power.

The Volkswagen's handling was impeccable — in this respect it leaves most of the cornpetion way behind, A low centre of gravity and having the weight of the engine and transmission over the rear driving wheels undoubtedly helps a great deal, but there is more to it than this.

Both front and rear suspension is independent with progressive rate coil springs and at the front there is a hefty anti-roll bar connected through drop links and rubber mountings to the lower radius rods. It is effective.

Rack and pinion steering is fitted to the new range, but because the driving position is immediately above the front suspension, and the steering box, the column cannot be connected directly to it. A relay box is mounted on the front cross

member to transmit steering movements back through 450. An additional gearbox in the steering mechanism could lead to vagueness at the wheel, but VW has managed to avoid this. I found the steering was commendably precise and neither too heavy nor too light for my taste.

Access to the driving seat is difficult. The seat is mounted directly above the front wheel. Therefore the step cannot be situated below it but has to be less conveniently sited further forward. And the door opens only to something less than 90 degrees.

The driver has to approach the step from behind it, at an angle, and then push and twist himself back into the seat. I found that the least difficult way of getting out of the cab was by means of a sort of "Fosbury Flop".

A sliding side-door is fitted as standard on the nearside and when pushed back this reveals how remarkably low the floor height is (just less than 18in above the ground) for this part of the load compartment, VW used paving stones to load the test vehicle and we soon appreciated the low floor when loading and unloading them. The rear top-hinged tailgate is held open by two gas-filled struts which hold it virtually horizontal so it will provide some protection in the rain for a driver loading or unloading at the rear.

However, I imagine that the rear part of the van will be used much less frequently for, while compared to the Type 2 the floor height here is some 6in lower, it is still relatively high at 825mm (35.2in) unladen. There is also the danger that any goods loaded at the rear may slide forward under braking and suffer damage when they tip over the step in the floor just in front of the rear wheels.

It is generally believed that a forward-control vehicle is less safe in a crash than one with the engine in front of the passengers because there is less protection for the passengers. Recently, Volkswagen has been trying to prove that this is not necessarily so by showing the results of a staged head on impact at 64km /h (40mph) between a Transporter and a conventional design passenger car.

The passenger car suffered far more damage and was undrivable, unlike the Transporter, whose strong front chassis members absorbed the impact and left the passenger compartment virtually undamaged — both doors could still be opened.

An interesting innovation on the horizontally opposed fourcylinder ngine, which is based on the 9xisting design, is the electronically controlled idling stabilisation. This allows the engine to idle on a much weaker mixture than normal, thus saving fuel and reducing carbon monoxide exhaust emission.

The electronic "'trigger box" is effective between 600 and 940rpm and varies the ignition timing, advancing it if the engine is put under load, such as when -driveis engaged with an automatic gearbox, and thus increasing the torque output and preventing it from stalling.

Because the ''trigger box'' varies the ignition timing, adjustments to timing and carburettors may be made only after bridging it. This is quite easy to do, for moulded plugs are used to connect all the ignition components. Nevertheless, I think operators would be well advised to leave these adjustments to Volkswagen distributors.

Volkswagen (GB) Ltd told us that the engine problems suffered by some of the first Transporters to arrive in this country were caused by ignition timing being set wrongly at the factory. They say this is now rectified.

The interior trim of the Transporter cab was in black — certainly the most practical colour for a delivery van and not unattractive in the VW. The driver's seat has a good range of adjustment, more than on the Type 2, and I found it to be comfortable during our two-day test. It was easy to find a com fortable driving position for the angle of the steering wheel seemed to me to be just right.

My only grouse with any of the instruments or controls was with the heater controls which do not have a blower switch (optional), but more importantly are not illuminated. This omission would be likely to irritate a driver getting in to the Transporter for the first time on a cold, dark winter's morning.

All-round visibility is much better than in the Type 2, parti cularly upward vision through the front screen, and rearward through the rear screen, almost double the size of the one in the old model. However, on a trip along a motorway on a wet day I found that the rear screen quickly became dirty. I think the extra cost of a rear wiper!

washer would be justified here, and for most vans, and welcomed by drivers.

The ride and handling of the new Transporter are outstandingly good and give the driver little less than average saloon car comfort. However, the rear mounted engine does intrude into the load space.

While this does not greatly reduce the total load volume it could prove inconvenient for a number of operators. This, and the van's relatively high price compared with its competitors, are the two factors which. I believe, will limit its appeal.