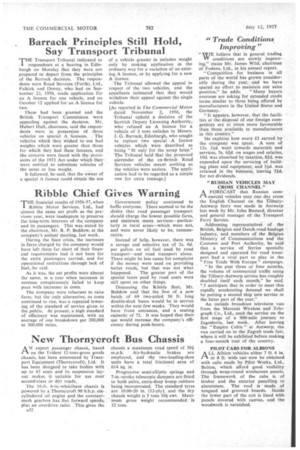 THE Transport Tribunal indicated to . respondents at a hearing in Edinburgh on Monday that they were not prepared to depart from the principles of the Barrack decision. The respondents were Road Services (Forth), Ltd., Falkirk and Denny, who had on September 22, 1956, made application for an A licence for one vehicle, and on October 12 applied for an A licence for two.

These had been granted and the British Transport Commission were appealing against the decision. Mr. Hubert Hull, chairman, said the respondents were in possession of three vehicles on special A licences. . The vehicles which they wished to use had weights which were greater than those for which they had these licences, and the concern were faced with the Provisions of the 1953 Act under which theywere entitled to substitute vehicles of the same or less weight.

It followed, he said, that the owner of a special A licence could obtain the use of a vehicle greater in unladen weight only by making application in the ordinary way for a variation of an existing A licence, or by applying for a new A licence.

The Tribunal allowed the appeal in respect of the two vehicles, and the appellants intimated that they would withdraw their appeal against the single vehicle.

[As reported in The Commercial Motor dated November 2, 1956, the Tribunal upheld a decision of the Scottish Deputy Licensing Authority, who refused an A licence for a vehicle of 3 tons unladen to Messrs. J. G. Barrack, Edinburgh, who sought to replace two special A licence vehicles which were described as being "fit only for the scrap heap." The Tribunal held that the proposed surrender of the ex-British Road Services vehicles meant nothing as the vehicles were useless. The application had to be regarded as a simple one for extra tonnage.]