Founded by a German exPOW with the aid of one 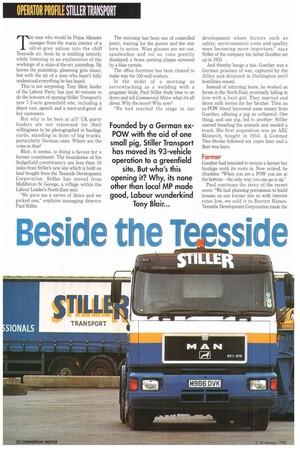 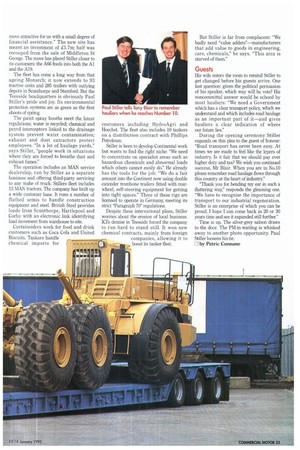 Page 34, 12th January 1995 — Founded by a German exPOW with the aid of one
Close
Noticed an error?
If you've noticed an error in this article please click here to report it so we can fix it.
Keywords :

small pig, Stiller Transport has moved its 93-vehicle operation to a greenfield site. But who's this opening it? Why, its none other than local MP made good, Labour wunderkind Tony Blair... Th e man who would be Prime Minister emerges from the warm interior of a silver-grey saloon into the chill Teesside air. Soon he is nodding intently while listening to an explanation of the workings of a state-of-the-art paintshop. He leaves the paintshop, gleaming grin intact, but with the air of a man who hasn't fully understood everything he has heard.

This is not surprising. Tony Blair, leader of the Labour Party has just 40 minutes to do the honours of opening Stiller Transport's new 7.2-acre greenfield site, including a depot tour, speech and a meet-and-greet of key customers.

But why is he here at all? UK party leaders are not renowned for their willingness to be photographed in haulage yards, standing in front of big trucks, particularly German ones. Where are the votes in that?

Blair, it seems, is doing a favour for a former constituent. The boundaries of his Sedgefield constituency are less than 10 miles from Stiller's new site which is built on land bought from the Teesside Development Corporation. Stiller has moved from Middleton St George, a village within the Labour Leader's North-East seat.

He gave me a series of dates and we picked one," explains managing director Paul Stiller. The morning ha been one of controlled panic, waiting for the guests and the star turn to arrive. Wine glasses are set out, sandwiches and vol au vons prettily displayed, a brass opening plaque screened by a blue curtain.

The office furniture has been cleared to make way for 100 well-wishers.

In the midst of a morning as nervewracking as a wedding with a pregnant bride, Paul Stiller finds time to sit down and tell Commercial Motor what it's all about. Why the move? Why now?

"We had reached the stage in our development where factors such as safety, environmental costs and quality were becoming more important," says Stiller of the company his father Gunther set up in 1955.

And thereby hangs a tale. Gunther was a German prisoner of war, captured by the Allies and detained in Darlington until hostilities ceased.

Instead of returning home, he worked on farms in the North-East, eventually falling in love with a local girl. They married and drove milk lorries for her brother. Then an ex-POW friend borrowed some money from Gunther, offering a pig as collateral. One thing, and one pig, led to another: Stiller started breeding the animals and needed a truck. His first acquisition was an AEC Monarch, bought in 1954. A Commer Two Stroke followed six years later and a fleet was born.

Gunther had intended to remain a farmer but haulage sunk its roots in. Now retired, he chuckles: "When you are a POW you are at the bottom—the only way you can go is up."

Paul continues the story of the recent move: "We had planning permission to build houses on our former site so with interest rates low, we sold it to Barrett Homes. Teesside Development Corporation made the move attractive for us with a small degree of financial assistance." The new site has meant an investment of film; half was recouped from the sale of Middleton St George. The move has placed Stiller closer to its customers: the A66 feeds into both the Al and the A19.

The fleet has come a long way from that ageing Monarch; it now extends to 93 tractive units and 285 trailers with outlying depots in Scunthorpe and Stamford. But the Teesside headquarters is obviously Paul Stiller's pride and joy. Its environmental protection systems are as green as the first shoots of spring.

The paint spray booths meet the latest regulations; water is recycled; chemical and petrol interceptors linked to the drainage System prevent water contamination; exhaust and dust extractors protect employees. "In a lot of haulage yards," says Stiller, 'people work in situations where they are forced to breathe dust and exhaust fumes."

The operation includes an MAN service dealership, run by Stiller as a separate business and offering third-party servicing to any make of truck. Stillers fleet includes 13 MAN tractors. The company has built up a wide customer base. It runs a number of flatbed semis to handle construction equipment and steel. British Steel provides loads from Scunthorpe, Hartlepool and Corby with an electronic link identifying load movement from warehouse to site.

Curtainsiders work for food and drink customers such as Coca Cola and United Biscuits. Tankers handle chemical imports for customers including HydroAgri and Hoechst. The fleet also includes 10 tankers on a distribution contract with Phillips Petroleum.

Stiller is keen to. dpvelop Continental work but wants to find the right niche: "We need to concentrate on specialist areas such as hazardous chemicals and abnormal loads which others cannot easily do." He already has the tools for the job: "We do a fair amount into the Continent now using double extender trombone trailers fitted with rearwheel, self-steering equipment for getting into tight spaces." Three of these rigs are licensed to operate in Germany, meeting its strict "Paragraph 70" regulations.

Despite these international plans, Stiller worries about the erosion of local business. ICI's demise in Teesside forced the company to run hard to stand still. It won new chemical contracts, mainly from foreign companies, allowing it to boost its tanker fleet. But Stiller is far from complacent: "We badly need "value adders"—manufacturers that add value to goods in engineering, cars, chemicals," he says. "This area is starved of them."

His wife enters the room to remind Stiller to get changed before his guests arrive. One last question: given the political persuasion of his speaker, which way will he vote? His noncommittal answer would be echoed by most hauliers: "We need a Government which has a clear transport policy, which we understand and which includes road haulage as an important part of it—and gives hauliers a clear indication of where our future lies."

During the opening ceremony Stiller expands on this plea to the guest of honour: "Road transport has never been easy. At times we are made to feel like the lepers of industry. Is it fair that we should pay ever higher duty and tax? We wish you continued success, Mr Blair. When you are in No.10 please remember road haulage flows through this country at the heart of industry."

"Thank you for bending my ear in such a flattering way," responds the gleaming one. "We have to recognise the importance of transport to our industrial regeneration. Stiller is an enterprise of which you can be proud; I hope I can come back in 20 or 30 years time and see it expanded still further."

Time is up. The silver-grey saloon draws to the door. The PM-in-waiting is whisked away to another photo opportunity. Paul Stiller loosens his tie.