Where commercials go under am 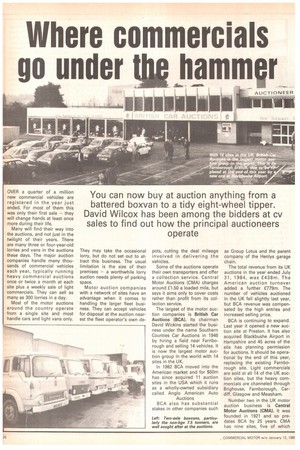 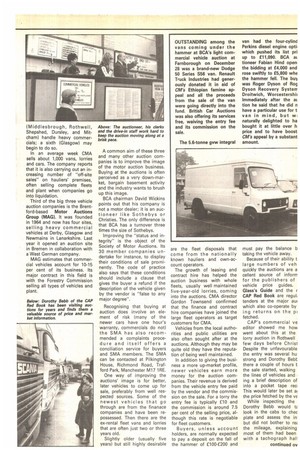 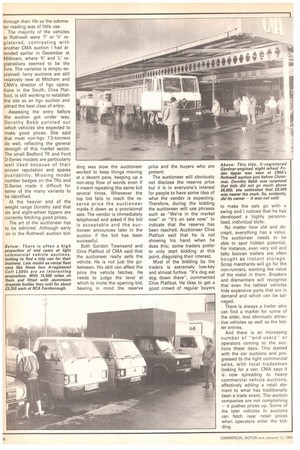 OVER a quarter of a million new commercial vehicles are registered in the year just ended. For most of them this was only their first sale — they will change hands at least once more during their life.

Many will find their way into the auctions, and not just in the twilight of their years. There are many three or four-year-old lorries and vans in the auctions these days. The major auction companies handle many thousands of commercial vehicles each year, typically running heavy commercial auctions once or twice a month at each site plus a weekly sale of light commercials. They can sell as many as 300 lorries in a day.

Most of the motor auctions around the country operate from a single site and most handle cars and light vans only.

They may take the occasional lorry, but do not set out to attract this business. The usual limitation is the size of their premises — a worthwhile lorry auction needs plenty of parking space.

Motor auction companies with a network of sites have an advantage when it comes to handling the larger fleet business. They can accept vehicles for disposal at the auction nearest the fleet operator's own de pots, cutting the deal mileage involved in delivering the vehicles.

Some of the auctions operate their own transporters and offer a collection service. Central Motor Auctions (CMA) charges around E1.50 a loaded mile, but says it aims only to cover costs rather than profit from its collection service.

The largest of the motor auction companies is British Car Auctions (BCA). Its chairman David Wickins started the business under the name Southern Counties Car Auctions in 1946 by hiring a field near Farnborough and selling 14 vehicles. It is now the largest motor auction group in the world with 14 sites in the UK.

Left: Two-axle box vans, particularly the non-hgv 7.5 tanners, are well sought after at the auctions.

as Group Lotus and the parent company of the Henlys garage chain.

The total revenue from its UK auctions in the year ended July 31, 1984, was £438m. The American auction turnover added a further £779m. The number of vehicles auctioned in the UK fell slightly last year, but BCA revenue was compensated by the high entries and increased selling price.

BCA is continuing to expand. Last year it opened a new auction site at Preston. It has also acquired Blackbushe Airport in Hampshire and 45 acres of the site has planning permission for auctions. It should be operational by the end of this year, replacing the existing Farnborough site. Light commercials are sold at all 14 of the UK auction sites, but the heavy commercials are channeled through Brighouse, Farnborough, Cardiff, Glasgow and Measham.

Number two in the UK motor auction business is Central Motor Auctions (CMA). It was founded in 1921 and so predates BCA by 25 years. CMA has nine sites, five of which (Middlesbrough, Rothweli, Shepshed, Dursley, and Mitcham) handle heavy commercials; a sixth (Glasgow) may begin to do so.

In an average week CMA sells about 1,000 vans, lorries and cars. The company reports that it is also carrying out an increasing number of "off-site sales" on hauliers' premises, often selling complete fleets and plant when companies go into liquidation.

Third of the big three vehicle auction companies is the Brentford-based Motor Auctions Group (MAG). It was founded in 1964 and now has four sites, selling heavy commercial vehicles at Derby, Glasgow and Newmains in Lanarkshire. Last year it opened an auction site in Bremen in collaboration with a West German company.

MAG estimates that commercial vehicles account for 10-15 per cent of its business. Its major contract in this field is with the Forestry Commission selling all types of vehicles and plant. A common aim of these three and many other auction companies is to improve the image of the motor auction business. Buying at the auctions is often perceived as a very down-market, bargain basement activity and the industry wants to brush up this image.

BCA chairman David Wickins points out that his company is not a motor dealer; it is an auctioneer like Sothebys or Christies. The only difference is that BCA has a turnover three times the size of Sothebys.

Improving the "status and integrity" is the object of the Society of Motor Auctions. Its 30 member companies undertake for instance, to display their conditions of sale prominently. The code of practice also says that these conditions should include a clause that gives the buyer a refund if the description of the vehicle given by the vendor is "false to any major degree".

Recognising that buying at auction does involve an element of risk (many of the newer cars have one hour's warranty, commercials do not) the SMA has also recommended a complaints procedure and itself offers a conciliation service for buyers and SMA members. The SMA can be contacted at Pilkington House, Richmond Road, Trafford Park, Manchester M17 1RE.

One way of improving the auctions' image is for better, later vehicles to come up for sale, preferably from well respected sources. Some of the newest vehicles that go through are from the finanace companies and have been repossessed. Then there are the ex-rental fleet vans and lorries that are often just two or three years old.

Slightly older (usually five years) but still highly desirable are the fleet disposals that come from the nationally known hauliers and own-account operators.

The growth of leasing and contract hire has helped the auction business with whole fleets, usually well maintained five-year-old lorries, coming into the auctions. CMA director Gordon Townsend confirmed that the finance and contract hire companies have joined the large fleet operators as target customers for CMA.

Vehicles from the local authorities and public utilities are also often sought after at the auctions. Although they may be quite old they have the reputation of being well maintained.

In addition to giving the business a more up-market profile, newer vehicles earn more money for the auction companies. Their revenue is derived from the vehicle entry fee paid by the vendor and the commission on the sale. For a lorry the entry fee is typically flO and the commission is around 7.5 per cent of the selling price, although this rate is negotiable for fleet customers.

Buyers, unless account holders, are normally expected to pay a deposit on the fall of the hammer of £100-E200 and must pay the balance b taking the vehicle away.

Because of their ability t large numbers of veh quickly the auctions are a cellent source of inform for the publishers of vehicle price guides. Glass's Guide and the r CAP Red Book are reguli tenders at the major au( which also co-operate by ing returns on the pi fetched.

CAP's commercial ve editor showed me how went about this at the lorry auction in Rothwell few days before Christ Despite the unfavourable the entry was several hu strong and Dorothy Bebt there a couple of hours the sale started, walking the lines of vehicles and ing a brief description of into a pocket tape rec This would later be set ai the price fetched by the VE

White inspecting the Dorothy Bebb would tz look in the cabs to chec plate and assess the in but did not bother to rei the mileage, explaining most of them had been with a tachograph hall through their life so the odometer reading was of little use.

The majority of the vehicles at Rothwell were 'T' or 'V' registered, contrasting with another CMA auction I had attended earlier in December at Mithcam, where 'K' and 'L' registrations seemed to be the fore. The variance is simply explained: lorry auctions are still relatively new at Mitcham and CMA's director of hgv operations in the South, Clive Platfoot, is still working to establish the site as an hgv auction and attract the best class of entry.

Assessing the entry before the auction got under way, Dorothy Bebb pointed out which vehicles she expected to make good prices. She said that most non-hgv 7.5-tonners do well, reflecting the general strength of this market sector. The small Bedford TK and Ford D-Series models are particularly well liked because of their proven reputation and spares availability. Missing model number badges on the TKs and D-Series made it difficult for some of the many variants to be identified.

At the heavier end of the weight range Dorothy said that six and eight-wheel tippers are currently fetching good prices.

The art of the auctioneer has to be admired. Although early on in the Rothwell auction bid ding was slow the auctioneer worked to keep things moving at a decent pace, keeping up a non-stop flow of words even if it meant repeating the same bid several times. Whenever the top bid fails to reach the reserve price the auctioneer marks it down as a provisional sale. The vendor is immediately telephoned and asked if the bid is acceptable and the auctioneer announces later in the auction if the bid has been successful.

Both Gordon Townsend and Clive Platfoot of CMA said that the auctioneer really sells the vehicle. He is not just the gobetween. His skill can affect the price the vehicle fetches. He needs to judge the level at which to invite the opening bid, bearing in mind the reserve price and the buyers who are present.

The auctioneer will obviously not disclose the reserve price but it is in everyone's interest for people to have some idea of what the vendor is expecting. Therefore, during the bidding the auctioneer will use phrases such as "We're in the market now" or "It's on sale now" to indicate that the reserve has been reached. Auctioneer Clive Platfoot said that he is not showing his hand when he does this; some traders prefer to only start bidding at this point, disguising their interest.

Most of the bidding by the traders is extremely low-key and almost furtive. "It's dog eat dog down there", commented Clive Platfoot. He likes to get a good crowd of regular buyers to make the sale go with a swing and I noticed that he has developed a highly personalised, individual style.

No matter how old and decrepit, everything has a value. The auctioneer needs to be able to spot hidden potential. For instance, even very old and tarty boxvan trailers are often bought as instant storage. Scrap merchants will go for the non-runners, wanting the value of the metal in them. Breakers and dismantlers will recognise that even the tattiest vehicles hide expensive parts that are in demand and which can be salvaged.

There is always a trader who can find a market for some of the older, less obviously attractive vehicles as well as the better entries.

And there is an increasing number of "end-users" or operators coming to the auctions these days. This started with the car auctions and progressed to the light commercial sales, with local tradesmen looking for a van. CMA says it is now spreading to heavy commercial vehicle auctions, effectively adding a retail element to what has traditionally been a trade event. The auction companies are not complaining — it pushes prices up. Some of the later vehicles in auctions can fetch near retail prices when operators enter the bidding.