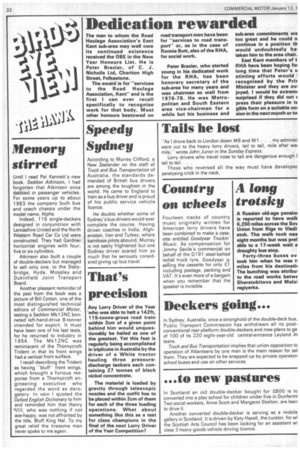 Page 34, 12th January 1979 — Deckers going...
Close
Noticed an error?
If you've noticed an error in this article please click here to report it so we can fix it.

In Sydney, Australia, once a stronghold of the double-deck bus, Public Transport Commission has withdrawn all its postconventional rear-platform double-deckers and now plans to ge of 100 of its 220 eight-year-old central-entrance Leyland At teans.

Truck and Bus Transportation implies that union opposition tc operation of Atlanteans by one man is the main reason for sel them. They are expected to be snapped up by private operator school buses and use on other services.