IS THE SLEEVE-VALVE ENGINE SUITABLE? 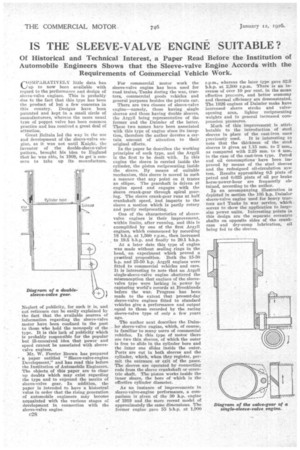 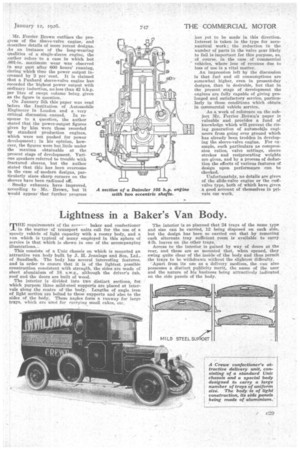 Of Historical and Technical Interest, a Paper Read Before the Institution of Automobile Engineers Shows that the Sleeve-valve Engine Accords with the Requirements of Commercial Vehicle Work.

COMPARATIVELY little data has up to now been available with regard to the performance and design of sleeve-valve engines. This is probably due to the fact that this type has been the product of but a few concerns in this country. Designs have been patented and kept in a small circle of manufacturers, whereas the more usual type of poppet valve has been common practice and has received a great deal of attention.

Great Britain led the way in the nse and development of the sleeve-valve engine, as it was not until Knight. the inventor of the double-sleeve-valve pattern, brought his idea to England that he was able, in. 1908, to get 'a concern to take up its manufacture.

Neglect of publicity, for such it is, and not reticence can be easily explained by the fact that the available sources of information regarding the sleeve-valve motor have been confined in the past to those who hold the monopoly of the type. It is this lack of publicity which is probably responsible for the popular but ill-conceived idea that power and speed cannot be associated with sleevevalve engines.

Mr. W. Perrier Brown has prepared a paper entitled "Sleeve-valve-engine Development," and has read this before the Institution of Automobile Engineers. The objects. of this paper are to clear up doubts which may exist regarding the type and to expound the merits of sleeve-valve gear. In addition, the paper is intended to have a historical value in order that the rising generation of automobile engineers may become acquainted with the various stages of development in connection with the sleeve-valve engine

For commercial motor work the sleeve-valve engine has been used for road trains,Tanks during the war, tractors, commercial goods vehicles and general purposes besides the private ear.

There are two classes of sleeve-valve engine—namely, those having single sleeves and those having double sleeves, the Argyll being representative of the former and the Daimler of the latter. These two names have been associated with this type of engine since its inception, therefore the author devotes a certain amount of attention to their original efforts.

In the paper he describes the working principles of each type, and the Argyll is the first to be dealt -with. In this engine the sleeve is carried inside the cylinder, the piston reciprocating inside the sleeve. By means of suitable mechanism, this sleeve is moved in such a manner that any point on it traces an ellipse. The gearshaft is driven at engine speed and engages with the sleeve crank-gear through spiral gearing. The sleeve crank-gear runs at belf crankshaft speed, and imparts to the sleeve a motion which is partly rotary and partly reciprocating.

One of the characteristics of sleevevalve engines is their improvement, within limits, after running, and this is exemplified by one of the first Argyll engines, which commenced-by recording 18 b.h.p. at 1,500 r.p.m., then increased to 19.5 b.h.p, and finally to 20.1 b.h.p.

At a later date this type of engine was made without sealing rings in the head, an experiment which proved a practical proposition. Both the 15-80 h.p. and 25-50 h.p. Argyll engines were fitted to commercial vehicles and cars. It is interesting to note that an Argyll single-sleeve-valve engine shattered the misconception that engines of the sleevevalve type were lacking in power by capturing world's records at Brooklands before the war. Progress has beeu made to the extent that present-day sleeve-valve engines fitted to standard vehicles give a performance and output equal to those recorded by the racing sleeve-valve type of only a few years ago.

The author next describes the Daimler sleeve-valve engine, which, of course, is familiar to many users of commercial vehicles. In this type of motor there are two thin sleeves, of which the outer is free to slide in the cylinder bore and the inner one slides inside the outer. Ports are cut in both sleeves and the cylinder, which, when they register, permit the entrance or exit of the gases. The sleeves are operated by connecting rods from the sleeve crankshaft or eccentric shaft. The piston works inside the inner sleeve, the bore of which is the effective cylinder diameter.

As an instance of improvements in sleeve-valve-engine performance, a comparison is given of the 30 h.p. engine of 1919 and the more recent model of approximately the same dimensions. The former engine gave 55 b.h.p. at 1,900 r.p.m., whereas the later type gave 82.5 b.b.p. at 2,500 r.p.m. There is an increase of over 10 per cent, in the mean effective pressure, and better economy and thermal efficiency are demonstrated. The 1926 engines of Daimler make have increased. sleeve stroke and valveopening area, lighter reciprocating weights and in general increased compression pressures. Much of this improvement is attributable to the introduction of steel sleeves in place of the cast-iron ones sreviously used. It is interesting to note that the thickness of the steel sleeves is given as 1.15 ram. to 2 inms as compared with 2.25 ram. to 4 mm, in the case of the cast-iron type. Petrol and oil consumptions have been improved by means of the steel sleeves and the redesigned oil-circulation systern. Results approaching 0.5 pints of petrol and 0.025 pints of oil per brake horse-power-hour are frequently obtained, according to the author. In an accompanying illustration is depicted in section the 105 h.p. Daimler sleeve-valve engine used for heavy tractors ani. Tanks in war service, which serves to show the application to largesize power units. Interesting points in this design are the separate eccentric shafts on opposite sides of the crankcase and dry-sump lubrication, oil being fed to the sleeves. Mr. Ferrier Brown outlines the progress of the sleeve-valve engine, and describes details of more recent designs. As an instance of the long-wearing qualities of a single-sleeve engine, the author refers to a ease in which but .001-in. maximum wear was observed in any part after 600 hours' running, during which time the power output increased by 2 per 'cent. It is claimed that a Panhard sleeve-valve engine has recorded the highest power output with ordinary induction, no less than 42 b.h.p. per litre of swept volume being, given as the figure in question.

critical discussion ensued. In response to a question, the author stated that the power-output figures -given by him were those recorded by standard production engines, which were not pushed for power development ; in his opinion, however, the figures were but little under the maxima obtainable at the present stage of development. Various speakers referred to trouble with fractured sleeves, but the author stated that this has been overcome in the case of modern designs, particularly since -sharp corners on the sleeves have been radiused off.

Smoky exhausts have improved, according to Mr. Brown, but 'it would appear that further progress

has yet. to be made in this direction. Interest is taken in the type for aeronautical work ; the reduction in the number of parts in the valve gear likely to fail is important for this purpose, as, of course, in the ease of commercial vehicles, where loss of revenue due to loss of use is a vital matter.

An impression left by the discussion is that fuel and oil consuniptions are somewhat higher, even in present-day designs, than is desirable, but that in the present stage of development the engines are fully capable of giving prolonged and satisfactory service, particularly in those conditions which obtain. in commercial vehicle service.

As a work of reference on the subject Mr. Ferrier Brown's paper is valuable and provides a fund of knowledge which will prevent the rising generation of automobile engineers from going over ground which has already been trodden in developing the sleeve-valve engine. For example, such particulars as compression ratios, valve settings, sleeve strokes and reciprocating weights are given, and by a process of deduction the effects of various features of design upon performance can be checked. • Unfortunately, no details are given of the slide-valve engine or the cuffvalve type, both of which have given a good account of themselves in private car work.