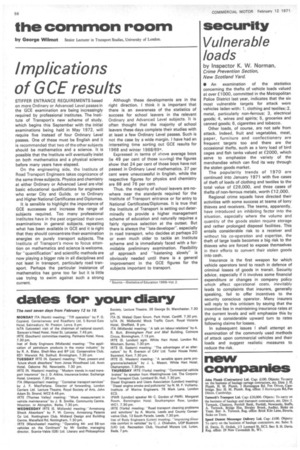 Page 58, 12th February 1971 — the common room
Close
Noticed an error?
If you've noticed an error in this article please click here to report it so we can fix it.
Keywords : Gce Advanced Level, Standardized Tests, International School Of Choueifat, Lahore, Education In Singapore, Education

STIFFER ENTRANCE REQUIREMENTS based on more Ordinary or Advanced Level passes in the GCE examination are being increasingly required by professional institutes. The Institute of Transport's new scheme of study, which begins this September with the initial examinations being held in May 1972, will require five instead of four Ordinary Level passes. One of these must be English and it is recommended that two of the other subjects should be mathematics and a science. It is possible that the Institute will eventually insist on both mathematics and a physical science before many years have-elapsed.

On the engineering side, the Institute of Road Transport Engineers takes cognizance of the same three subjects. Physics and chemistry at either Ordinary or Advanced Level are vital basic educational qualifications for engineers who enter City and Guilds, or to Ordinary and Higher National Certificates and Diplomas.

It is sensible to highlight the importance of GCE successes and increase the range of subjects required. Too many professional institutes have in the past organized their own examinations in general subjects, repeating what has been available in GCE and it is right that they should concentrate their examination energies on purely transport subjects. The Institute of Transport's move to focus attention on mathematics and science is welcome, for "quantification" and scientific methods are now playing a bigger role in all disciplines and not least in transport, particularly road transport. Perhaps the particular insistence of mathematics has gone too far but it is little use trying to swim against such a strong current. Although 'these developments are in the right direction, I think it is important that there is an awareness of the statistics of success for school leavers in the relevant Ordinary and Advanced Level subjects. It is often thought that the majority of school leavers these days complete their studies with at least a few Ordinary Level passes. Such is not the case by a wide margin. I have had an interesting time sorting out GCE results for 1968 and winter 1968/69*.

Expressed in terms of above average boys fie 49 per cent of those leaving) the figures show that 24 per cent of those boys have not passed in Ordinary Level mathematics, 37 per cent were unsuccessful in English, while the respective figures for physics and chemistry are 68 and 76 per cent.

Thus, the majority of school leavers are nowhere near the standards required for the Institute of Transport entrance or for entry to National Certificates/Diplomas. It is true that the Institute. of Transport is setting out determinedly to provide a higher management scheme of education and naturally requires a fairly rigorous selection at the outset. But there is always the "late developer", especially in road transport, who decides at perhaps 20 or even much older to tackle an Institute scheme and is immediately faced with a formidable preliminary examination. Flexibility of approach and "hastening slowly" is obviously needed until there is a general improvement in the GCE figures for the subjects important to transport.