The Desperate Need for Improvement in Transpor ,ducation 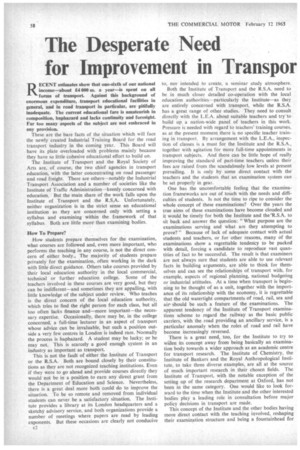 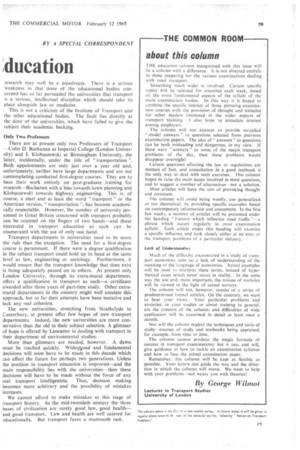 Page 60, 12th February 1965 — The Desperate Need for Improvement in Transpor ,ducation
Close
Noticed an error?
If you've noticed an error in this article please click here to report it so we can fix it.
Keywords : Logistics, Transport, Education In France, British Professional Bodies, Islamic University Of Technology, Education

B Y .4 SPECIAL CORRESPONDENT RECENT estimates show that one-sixth of our national income—about £.4 000 m. a year—is spent on all forms of transport. Against this background of enormous expenditure, .transport educational facilities in general, and in road transport in particular, are pitifully inadequate. The current educational fare is amateurish in composition, haphazard and lacks continuity and foresight. Far too many aspects of the subject are not embraced in any provision.

These are the bare facts of the situation which will face the newly created Industrial Training Board for the road transport industry in the coming year. This Board will have its plate overloaded with problems mainly because they have so little cohesive educational effort to build on.

The Institute of Transport and the Royal Society of Arts are, of course, the two chief agencies in transport education, with the latter concentrating on road passenger and road freight. There are others—notably the Industrial Transport Association and a number of societies like the Institute of Traffic Administration—keenly concerned with education. But the main share of the work falls upon the Institute of Transport and the R.S.A. Unfortunately, neither organization is in the strict sense an educational institution as they are concerned only with setting a syllabus and examining within the framework of that syllabus. Both are little more than examining bodies.

How students prepare themselves for the examination, what courses are followed and, even more important, who performs the teaching in any course, is not the direct concern of either body.. The majority of students prepare privately for the examination, often working in the dark with little direct guidance. Others take courses provided by their local education authority in the local commercial, technical or further education college. Some of the teachers involved in these courses are very good, but they can be indifferent—and sometimes they are appalling, with little knowledge of the subject under review. Who teaches is the direct concern of the local education authority, which tries to find the right person for each class, but all too often lacks finance and—more important—the necessary expertise. Occasionally, there may be in the college concerned, a full-time lecturer in an aspect of transport whose advice can be invaluable, but such a position outside a very few centres in London is indeed rare. Normally the process is haphazard. A student may be lucky; or he may not. This is scarcely a good enough system in an industry as important as transport.

This is not the fault of either the Institute of Transport or the R.S.A. Both are bound closely by their constitutions as they are not recognized teaching institutions. Even if they were to go ahead and provide courses directly they would not be in a position to earn any direct grant from the Department of Education and Science. Nevertheless, there is a great deal more both could do to improve the situation. To be so remote and removed from individual students can never be a satisfactory situation. The Institute provides a library at its London headquarters and a sketchy advisory service, and both organizations provide a number of meetings where papers are read by leading exponents. But these occasions are clearly not conducive c/ to, nor intended to create, a seminar study atmosphere.

Both the Institute of Transport and the R.S.A. need to be in much closer detailed co-operation with the local education authorities—particularly the Institute—as they are entirely concerned with transport, while the R.S.A. has a great range of other studies. They need to consult directly with the L.E.A. about suitable teachers and try to build up a nation-wide panel of teachers in this work. Pressure is needed with regard to teachers' training courses, as at the present moment there is no specific teacher training in transport. By arrangement with the L.E.A., inspection of classes is a must for the Institute and the R.S.A., together with agitation for more full-time appointments in transport subjects. And there can be little hope of really improving the standard of part-time teachers unless their fees are raised from the scandalously low levels at present prevailing. It is only by some direct contact with the teachers and the students that an examination system can be set properly in gear.

One has the uncomfortable feeling that the examination frameworks are out of touch with the needs and difficulties of students. Is not the time to ripe to consider the whole concept of these examinations? Over the years the true aims of these examinations have become clouded and it would be timely for both the Institute and the R.S.A. to sit back and answer the question: "What purpose are the examinations serving and what are they attempting to prove?" Because of lack of adequate contact with actual students and teachers, or for other reasons, many Of the examinations show a regrettable tendency to be packed with detail, forcing a candidate to reproduce vast quantities of fact to be successful. The result is that examiners are not always sure that students are able to use relevant facts in building arguments, are able to think for themselves and can see the relationships of transport with, for example, aspects of regional planning, national budgeting or industrial attitudes. At a time when transport is beginning to be thought of as a unit, together with the importance of its relationship with the economy, it is regrettable that the old watertight compartments of road, rail, sea and air should be such a feature of the examinations. The apparent tendency of the Institute of Transport examinations scheme to regard the railway as the basic public carriers, with the road providing an ancillary service, is a particular anomaly when the roles of road and rail have become increasingly reversed.

There is a great need, too, for the Institute to try to wiaen its concept away from being basically an examination body towards a wider approach as an academic centre for transport research. The Institute of Chemistry, the Institute of Bankers and the Royal Anthropological Institute, to take three diverse examples, are all at the source of much important research in their chosen fields. The Institute of Transport, with the notable exception of the setting up of the research department at Oxford, has not been in the same category. One would like to look forward to the time when the Institute and the other interested bodies play a leading role in consultation before major policy decisions in transport are made.

This concept of the Institute and the other bodies having more direct contact with the teaching involved, reshaping their examination structure and being a fountainhead for

research may well be a pipedream. There is a serious weakness M that none of the educational bodies concerned has so far persuaded the universities that transport is a serious, intellectual discipline which should take its place alongside law or medicine.

This is not a criticism of the Institute of Transport and the other educational bodies. The fault lies directly at the door of the universities, which have failed to give the subject their academic backing.

Only Two Professors There are at present only two Professors of Transport --Colin D. Buchanan at Imperial College (London University) and J. Klobuszewski at Birmingham University, the latter, incidentally, under the title of "transportation ". Both appointments are only just over a year old and, unfortunately, neither have large departments and are not contemplating conducted first-degree courses. They are to base their work entirely on post-graduate training for research—Buchanan with a bias towaFds.town planning and Klobuszewski 'towards highway engineering. This is, of course, a start and at least the word "transport:" or the American version, transportation ", has become academically respectable. However, The rturither of university personnel in Great Britain concerned with transport probably can be counted on the fingers of two hands—and those interested in transport education as such can be enumerated with the use of only one hand.

Transport departments in universities need to be more the rule than the exception. The need for a first-degree course is paramount. If there were a degree qualification in the subject transport could hold up its head at the same level as law, engineering or sociology. Furthermore, it would ensure that the transport knowledge that does exist is being adequately passed on to others. At present only London University, through its extra-mural department, offers a qualification in transport as such—a certificate awarded after three years of part-time study. Other extramural departments in the country might well emulate this approach, but so far their attempts have been tentative and lack any real cohesion.

The new universities, stretching from Strathclyde to Canterbury, at present offer few hopes of new transport departments. Indeed, the new universities are more conservative than the old in their subject selection. A glimmer of hope is offered by Lancaster in dealing with transport in their department of environmental studies.

More than glimmers are needed, however. A dawn must be reached quickly. Widesp.read and fundamental decisions will soon have to be made in this decade which can affect the future for perhaps two generations. Unless the position in transport education is improved—and the main responsibility lies with the universities—then these decisions will have to be made without the force of any real transport intelligentsia. Thus, decision making becomes more arbitrary and the possibility of mistakes increases.

We cannot afford to make mistakes at this stage of transport history. In the mid-twentieth century the three bases Of civilization are surely good law, good health— and good transport. Law and health are well catered for educationally. But transport faces a mammoth task.