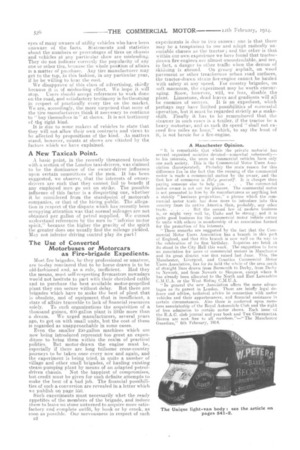 Page 2, 12th February 1914 — A Manchester Opinion.
Close
Noticed an error?
If you've noticed an error in this article please click here to report it so we can fix it.

" It is remarkable that while the private motorist has several organized societies devoted—somewhat vehemently— to his interests, the users of commercial vehicles have only one such society. This is the. Commercial Motor Users Association (Incorporated). Probably the main reason for this difference lies in the fact. that the running of the commercial motor is made a commercial matter by the owner, and the first law of commerce is Help yourself. It is cheaper than paying someone else to help you. . . The commercial motor owner is not out for pleasure. 'The commercial motor is not presented to him by its manufacturers as anything but a strictly " business propcsition," a phrase which the commercial motor trade has done more to introduce into this eloade

initry from its native America than, probably, any other

t But the second law of modern business is, or might very well be, Unite and be strong; and it is quite good business for the commercial motor vehicle owner to unite with others in membership of an association formed for the protection of his interests.

" These remarks are suggested by the fact that the Commercial Motor Users Association has a branch in this part of England, and that this branch is now well on its way to the celebration of its first birthday. Liquiries are brisk at its stand in the City Hall this week. The suggestion to form an association for users of commercial motors in Manchester and its great district. was first raised last June,This, the Manchester, Liverpool, and Counties Commercial Motor Users Association, has for its field the whole. of the area north of straight lines drawn from &mouth to Derby, from Derby to Newark, and from Newark to Skegness, except where. it has already been allocated to the North and East Lancashire C.M.U.A. or the West Riding C.M.U.A.

" In general the new Association offers the same advantages as its parent in London. These are briefly legal defence and advice, technical advice in connection with motor vehicles and their appurtenances, and financial assistance in certain circumstances. Also there is conferred upon members associateship of the Royal Automobile Club and the right of free admission to certain motor shows_ Each issue of the R.A.C. club journal and year book and THE COMMERCIAL, MOTOR are sent free to all members."—" The Manchester Guardian," 6th February, 1914.