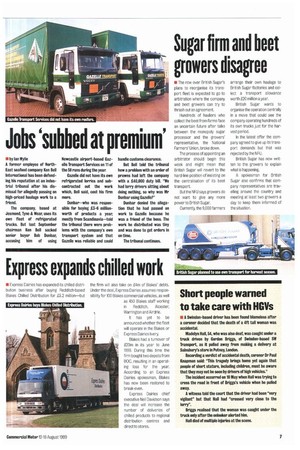 Page 9, 12th August 1999 — Jobs 'subbed at premium'
Close
Noticed an error?
If you've noticed an error in this article please click here to report it so we can fix it.
Keywords : Gazelle, Haulage, Mope, Law / Crime

A former employee of NorthEast seafood company Ken Bell International has been defending his reputation at an industrial tribunal after his dismissal for allegedly passing on high-priced haulage work to a friend.

The company. based at Jesmond, Tyne & Wear, uses its own fleet of refrigerated trucks. But last September chairman Ken Bell sacked senior buyer Bob Dunbar, accusing him of using Newcastle airport-based Gazelle Transport Services on 11 of the 58 runs during the year.

Gazelle did not have its own refrigerated lorries and subcontracted out the work which, Bell said, cost his firm

Dunbar—who was responsible for buying £3-6 millionworth of products a year. mostly from Scandinavia—told the tribunal there were problems with the company's own transport system and that Gazelle was reliable and could handle customs clearance.

But Bell told the tribunal how a problem with an order of prawns had left the company with a £40,000 duty bill. "We had lorry drivers sitting about doing nothing, so why was Mr Dunbar using Gazelle?"

Dunbar denied the allegation that he had passed on work to Gazelle because he was a friend of the boss. The work he distributed was tiny and was done to get orders in on time.