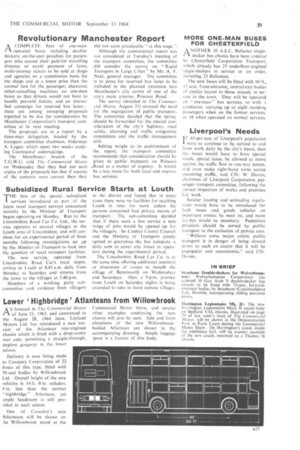 Page 61, 11th September 1964 — Liverpool's Needs
Close
Noticed an error?
If you've noticed an error in this article please click here to report it so we can fix it.
Keywords : Traffic Law, Lane, Traffic, Liverpool, Bus

IF 65 per cent of Liverpool's population

were to continue to be carried to and from work daily by the city's buses, then the buses would have to have special roads, special lanes, he allowed to move aeainst the traffic flow in one-way streets, and even make right-hand turns across oncoming traffic, said Cllr, W. Davies, chairman of Liverpool Corporation passenger transport committee, following the annual inspection of works and premises last week.

Stricter loading and unloading regulations would have to be introduced for both buses and goods vehicles on important routes, he went on, and more iay-bys would be neceSsary. Pedestrian precincts should be served by public transport to the exclusion of private cars.

" Without some major action, public transport is in danger of being slowed down to such an extent that it will be unpopular and uneconomic," said Cllr. Davies,