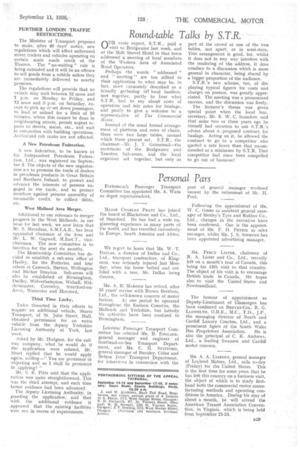 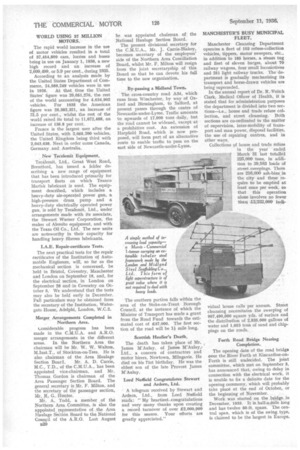 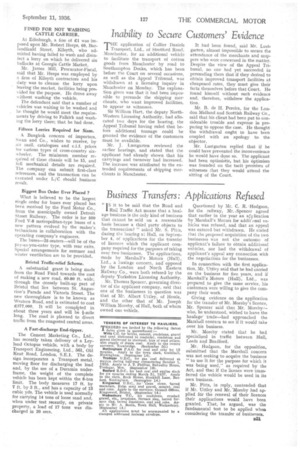 Page 29, 11th September 1936 — Personal Pars
Close
Noticed an error?
If you've noticed an error in this article please click here to report it so we can fix it.
Keywords : Truck, Leyland Motors, Steam Wagon

MAJOR CHARLES PRATT has joined the board of Blackstone and Co., Ltd., of Stamford. He has had a wide engineering experience in many parts of the world, and has travelled extensively in Europe, South America and Africa.

We regret to learn that MR. W. T. DALLAS, a director of Dallas and Co., Ltd., transport contractors, of Kingston, was seriously injured _last Monday, when his horse bolted and collided with a tree, Mr. Dallas being thrown.

Ma. A, K. MAiinoN has retired, after 35 years' service with Brown Brothers, Ltd., the well-known concern of motor factors. At one period he operated throughout the Eastern Counties, the Midlands and Yorkshire, but latterly his activities have been confined to Birmingham.

post of general manager rendered vacant by the retirement of Mr. II. Pool.

MR. PERCY LISTER, chairman of R. A, Lister and Co., Ltd., recently left on a month's tour of Canada, this being his 12th visit to that country. The object of his visit is to encourage British trade in Canada. He hopes also to visit the United States and Newfoundland.

The honour of appointment as Deputy-Lieutenant of Glamorgan has been conferred on BREVET-COL. R. G. LLEWELYN, 0.B.B., MC., T.D., J.P.. the managing director of Neath and Cardiff Luxury Coaches, Ltd., and a prominent figure of the South Wales Bus Proprietors Association. He is also the principal of C. K. Andrews, Ltd., a leading Swansea and Cardiff motor concern.

MR. A. A. LIARDET, general manager of Leyland Motors, Ltd., sails to-day (Friday) for the United States. This is the first time for some years that he has left this country on a business yisit, the object of which is to study firsthand both the comniercial motor manufacturing methods and operating conditions in America. During his stay Of about a Month, he will attend the American Transit Association Convention; in Virginia; which is being held from September 21-24. WORLD USING 37 MILLION MOTORS.

According to an analysis made by the United States Department of Commerce, 24,589,249 vehicles were in use

France is the largest user after the United States, with 2,065,200 vehicles, the United Kingdom being third with 2,043,638. Next in order come Canada. Germany and Australia.

Tecalemit, Ltd., Great West Road, Brentford, has issued a folder describing a new range of equipment that has been introduced primarily for transport fleets on which Texaco Marfak lubricant is used. The equipment described, which includes a heavy-duty air-operated power gun, a high-pressure drum pump and a heavy-duty electrically operated power gun, is sold by Tecalemit, Ltd., under arrangements made with its associate, the Stewart Warner Corporation, the make' of Alemite equipment, and with the Texas Oil Co., Ltd. The new units are noteworthy in their capacity for handling heavy fibrous lubricants.

The next practical tests for the repair certificates of the Institution of Automobile Engineers, will, so far as the mechanical section is concerned, be held in Bristol, Coventry, Manchester and London on September 19, and, for the electrical section, in London on September 26 and in Coventry. on October 3; We understand that the tests may also be held early in December. Full particulars may be obtained from the secretary of the Institution, Watergate House, Adelphi, London, W.C.2.

The present divisional secretary for the C,M.U.A., Mr. J. Currie-Blakey, becomes secretary of the employers' side of the Northern Area Conciliation Board, whilst Mr. F. Milton will resign from the joint secretaryship of this Board so that he can devote his full time to the new organization.

• The cross-country road A34, which runs from Winchester, by way of Oxford and Birmingham, to Salford, at present passes through the centre of Newcastle-under-Lyme. Traffic amounts to upwards of 17,000 tons daily, but the road cannot be widened, except at a prohibitive cost. An extension of Harpfield Road, which is now proposed, will form part of an alternative route to enable traffic to pass on the east side of Newcastle-under-Lyme.

The southern portion falls within the area of the Stoke-on-Trent Borough Council, at the instance of which the Minister of Transport has made a grant from the Road Fund towards the estimated cost of £37,000. The first section of the road will be 14 mile Icing.

The death has taken place of Mr. James M'Aulay, of James M'Aulay.+ Ltd., a concern of contractors and motor hirers, Newtown, Milngavie. He died on his 71st birthday. He was the eldest son of the late Provost James M'Aulay.

A telegram received by Stewart and Ardern, Ltd., from Lord Nuffield reads: "My heartiest congratulations and very many thanks upon creating a record turnover of over £2,000,000 for this season. Your efforts are greatly appreciated." MANCHESTER'S BUSY MUNICIPAL FLEET.

Manchester Cleansing Department operates a fleet of 103 refuse-collection vehicles, tippers, motor sweepers, etc., in addition to 185 horses, a steam, tug and fleet of eleven barges, about 70 railway wagons, four small loconiotives and 251 light railway trucks. The department is gradually mechanising its transport and horse-drawn vehicles are being superseded.

In the annual report of Dr. R.‘Veitch Clark, Medical Officer of Health, it is stated that for administration purposes the department is divided into two sections—i.e., house and trade refuse collection, and street cleansing. Both sections are co-ordinated in the matter of supervision, inter-mobility of transport and man power, disposal facilities, the use of repairing centres, and in other ways.

Collections of house and trade refuse in the year ended March 31 last totalled 225,000 tons, in addition to 39,583 loads of street sweepings. There are 216,000 ash-bins. in the city and these require to be emptied at least once per week, so that this operation alone involves no fewer thaw d.14232,000

vidual house calls per annum. Street cleansing necessitates the sweeping of 907,490,000 square yds. of surface and the distribution of 2,835,000 gallons of water and 1,653 tons of sand and chippings on the roads.

The opening date of the road bridge over the River Forth at Kincardine-onForth is still undecided. The joint committee, which met on September 3, has announced that, owing to delay in connection with the electrical work, it is unable to fix a definite date for the opening ceremony, which will probably take place at the end of October, or the beginning of November.

Work was started on the bridgein December, 1933. It is half-kmile long and has twelve 50-ft. spans. The central span, which is of the swing type, is claimed to be the largest in Europe. FINED FOR NOT WASHING CATTLE CARRIER.

At Edinburgh, a fine of £1 was imposed upon Mr. Robert Heeps, 69, Barlandfauld Street, Kilsyth, who admitted having failed to wash and disinfect a lorry on which he delivered six bullocks at Georgie Cattle Market.

Mr. James Mill, Procurator-Fiscal, said that Mr. Heeps was employed by a firm of Kilsyth contractors and his duty was to cleanse the lorry upon leaving the market, facilities being provided for the purpose. He drove away without washing the vehicle.

The defendant said that a number of vehicles was waiting to be washed and he thought he would meet the requirements by driving to Falkirk and washing the lorry there; that he had done.

A Bangkok concern of importers, Swan and Co., wishes to receive, by air mail, catalogues and c.i.f. prices for various types of cross-country sixwheeler. The minimum number required of these chassis will be 15, and full mechanical details are required. The company can submit first-class references, and the transaction can be executed under L/C should _business result.

What is believed to be the largest single order for buses ever placed has been received by the Ford Motor Co., from the municipally owned Detroit Street Railway. The order is for 500 Ford V-8 metropolitan-type buses of a new pattern evolved by the maker's technicians in collaboration with the operating company's engineers.

The buses-25-seaters----will be of the pay-as-you-enter type, with rear exits. Special arrangements for summer and winter ventilation are to be provided.

A substantial grant is being made from the Road Fund towards the cost of making a new road, 60-80 ft. wide; through the densely built-up part of Bristol that lies between St. Augustine's Parade and Victoria Street. The new thoroughfare is to be known as Western Road, and is estimated to cost £377,000. It will be complpted in about three years and will be i-mile long. The road is planned to divert traffic from the congested central areas.

The Cement Marketing Co., Ltd., has recently taken delivery of a Leyland Octopus vehicle, with a body by Transport Engineering, Ltd., 561, Old Kent Road, London, S.E.1. The design incorporates a Transport metal,• moving floor for discharging the load and, by the use of a Duramin underframe, the weight of the complete vehicle has been kept within the 8-ton limit. The body measures 17 ft. by 7 ft. by 3 ft., and has a capacity of 13 cubic yds. The vehicle is used normally for carrying 14 tons of loose sand and, when under test recently, on private property, a load of 17 tons was discharged in 20 secs.