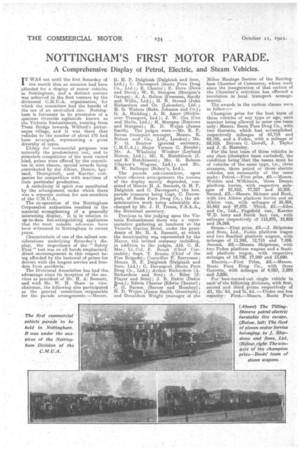 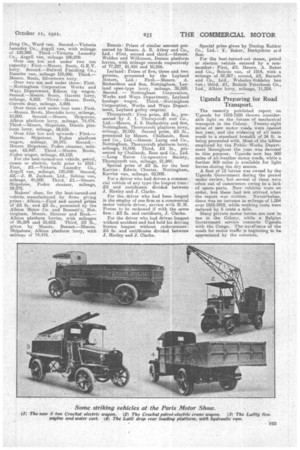 A Comprehensive Display of Petrol, Electric, and Steam Vehicles.

IT WAS not until the first Saturday of the month that an occasion had been afforded for a display of motor vehicles in Nottingham, .and a distinct success was achieved in the first venture by the divisional C.M.U.A. organization, for which the committee. had the benefit of the use of an unrivalled site. Notting. ham is fortunate in its possession of a spacious riverside esplanade known as the Victoria Embankment, running from Trent Bridge towards Wilford's picturesque village, and it was there that vehicles to the number of about 170 had been arranged, representing a great" diversity of types.

Utility for commercial purposes was naturally the predominant test, and to S timul a te competition of the most varied kind, prizes were offered by the committee in nine classes, special awards being contributed by the Albion, Dennis, Leyland, Thernycroft, and Karrier_ cornpause for competition with machines of their particular production.

A catholicity of spirit was manifested by the arlangement under which there was a separate section for non-members of the C.M.U.A.

The co-operation of the Nottingham Corporation authorities resulted in the material strengthening of a generally interesting display. It is in relation to. ap-to-dato fire-extinguishing appliances that the most notable advances have been witnessed in Nottingham in recent years. Characteristic of one of the salient considerations underlying Saturday's display, the importance of the -" Safety First" test was on all hands emphasized; direct encouragement in this respect being afforded by the bestowal of prizes for drivers with the longest service and freedom from accidents.

Previous to the judging upon the Victoria Embankment there was a representative gathering at luncheon at the Victoria Station Hotel, under the presidency of Mr. EL A. Bennett, at which the municipality wa-s represented by the Mayor, the invited company including, in addition to the judges, Ald. C. H. Mee; Lt.-Col: F. Brook (Chief. Constable); Supt. T. Breaks (Chief of the Fire Brigade); Councillor F. Berryman; Messrs. H. P. Dalgleish (Dalgleish and Sons, Ltd.); C. Davenport (Roots Pure Drug Co., Ltd.); Arthur Richardson (A. Richardson and Son); A. Riley :(J: Player and Sons); J. B. Dakin (Dakin Duos.); Edviin Chester (Edwin Chester') ; C. G. Barnes_ (Barnes and Hainbey);

H. D. Wojan. (James Smith, Granthain); and Donaldson Wright (manager of the Mdlor Haulage Section of the Nottingham Chamber of Commerce, whose work since the inauguration of that section of the Chamber's activities has effected a revolution in local transport arrangements).

The awards in the various classes were as follow e

ChampiOn prize for the best team of three vehicles of any type or age, each member being allowed to enter one team only: Messrs. Boots Pure Drug Co. with two Garretts, which had accomplished respectively mileagesof 63,714 and 69,786, and a Foden' with a mileage of 68,518. .Drivers C. Cowell, J. • Taylor, and J. 8. Barnsley.

Makers' class, for the best-turned-out vehicle, manufactured by firms giving prizes : Albion.----First and second prizes of£5 5s. and 23 3s., presented by the Albion Motor Co. and Bennett's; Nottingham, Messrs. Skinner and Rook.— Albion platform lorries, with mileages of 26,504 and 55,662. Third, 22 2s., given by Messrs. Bennet. —Messrs. .Shipstone, Albion platform lorry, with mileage of 74,474.

Dennis: Prizes of similar amountpresented by Messrs. A. R. Atkey and Co., Ltd. : First, second and third.—Messrs. Weldon and Wilkinson, Dennis platform lorries, with mileage records respectively of 77,227, 81,410 and 10,256.

For a driver who had driven a commercial vehicle of any type-the longest. time: 22 and certificates divided between J. Hanley and J. Clarke.

For the . driver who had been longest in the employ of one firm as a commercial motor vehicle driver, service with ELM. Forces to be reckoned if with the same firm : 23 3s, and certificate, J. Clarke.

For the driver who had driven longest without accident and had held his driving licence longest without endorsement: £5 5s. and certificates divided between J. Hanley and J. Clarke.

The recently published report; on Uganda for 1919-1920 throws considerable light on the future of mechanical transport in the Colony. Twenty-eight miles of new motor roads were opened last year, and the widening of all main roads to a standard breadth of 24 ft. is being proceeded with. Most of the labour employed by the Public Works Department throughout the year was devoted to this purpose. Uganda now has 600 miles of all-weather motor roads, while a further 800 miles is available for light lorries-during the dry season. A fleet of 12 lorries was owned by the Uganda Government during the period under review, but several of these were often out of commission owing to a lack of spare; parts. New vehicles were on order, but these had -not arrived when the report was written. Nevertheless, there was an increase in mileage of 1,254 over 1918-1919, while working costs were reduced by 5 cents a mile.

Many private motor lorries are now in use in the Colony, while a Belgian Government service connects Uganda with the Congo. The ekcerence of the roads for motor traffic is beginning to be appreciated by the colonists.