Dodgy record comes back to haunt couple as bid is rejeded 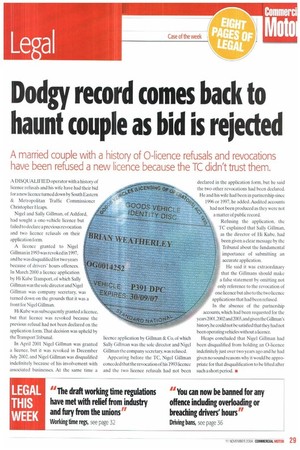 Page 27, 11th November 2004 — Dodgy record comes back to haunt couple as bid is rejeded
Close
Noticed an error?
If you've noticed an error in this article please click here to report it so we can fix it.
Keywords : Business / Finance

A married couple with a history of 0-licence refusals and revocations have been refused a new licence because the TC didn't trust them.

A DISQUALIFIED operator with a history of licence refusals and his wife have had their bid for a new licence turned down by South Eastern & Metropolitan Traffic Commissioner Christopher Heaps.

Nigel and Sally Gillman, of Ashford, had sought a one-vehicle licence but failed to declare a previous revocation and two licence refusals on their application form.

A licence granted to Nigel Gillman in 1993 was revoked in 1997, and he was disqualified for two years because of drivers' hours offences. In March 2000 a licence application by Hi Kube Transport, of which Sally Gillman was the sole director and Nigel Gillman was company secretary, was turned down on the grounds that it was a front for Nigel Gillman.

Hi Kube was subsequently granted a licence, but that licence was revoked because the previous refusal had not been declared on the application form. That decision was upheld by the Transport Tribunal.

Appearing before the TC, Nigel Gillman conceded that the revocation of his 1993 licence and the two licence refusals had not been declared in the application form, but he said the two other revocations had been declared. He and his wife had been in partnership since 1996 or 1997, he added. Audited accounts had not been produced as they were not a matter of public record.

Refusing the application, the TC explained that Sally Gillman, the director of Hi Ku be. had been given a clear message by the Tribunal about the fundamental importance of submitting an accurate application.

He said it was extraordinary that the Gillmans should make a false statement by omitting not only reference to the revocation of one licence but also to the two licence applications that had been refused.

In the absence of the partnership accounts, which had been requested for the years2001,2002 and 2003,and given the Gillmails history, he could not be satisfied that they had not been operating vehicles without a licence.

Heaps concluded that Nigel Gillman had been disqualified from holding an 0-licence indefinitely just over two years ago and he had given no sound reasons why it would be appropriate for that disqualification to he lifted after such a short period. •