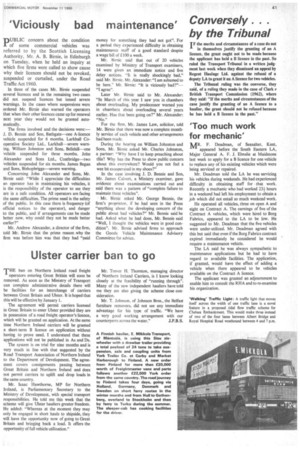 Page 43, 11th November 1966 — by the Tribunal
Close
Noticed an error?
If you've noticed an error in this article please click here to report it so we can fix it.

IF the merits and circumstances of a case do not

in themselves justify the granting of an A licence, the grant ought not to be made because the applicant has held a B licence in the past. So ruled the Transport Tribunal in a written judgment last week when they dismissed an appeal by Regent Haulage Ltd. against the refusal of a deputy LA to grant it an A licence for two vehicles.

The Tribunal ruling was the converse, they said, of a ruling they made in the case of Clark v British Transport Commission (1962), where they said: "If the merits and circumstances of the case justify the granting of an A licence to a haulier, the grant should not be refused because he has held a B licence in the past."