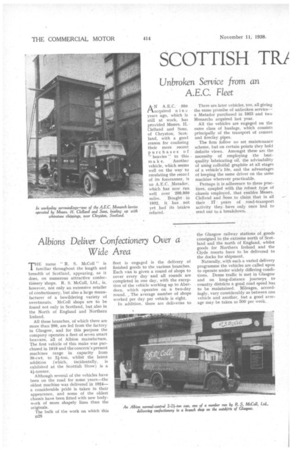 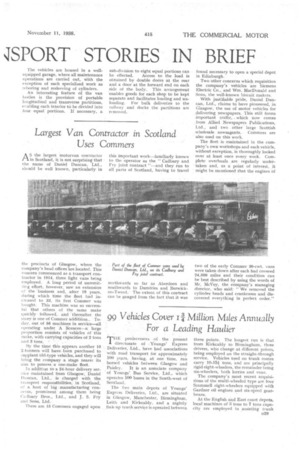 Page 150, 11th November 1938 — SCOTTISH TR' 4SPORT STORIES IN BRIEF
Close
Noticed an error?
If you've noticed an error in this article please click here to report it so we can fix it.

Unbroken Service from an

A.E.C. Fleet AN A.E.C. 509 acquired nine years ago, which is still at work, has provided Messrs. H. Clelland and Sons, of Chryston, Scotland, with a good reason for confining their more recent purchases of " heavies '.' to this make. Another vehicle, which seems well on the way to emulating the recori of its forerunner, is an A.E.C. Matador, which has now run well over 200,000 miles. Bought in

• 1932, it has not yet had its brakes refaced. There are later vehicles, too, all giving the same promise of unbroken service-a Matador purchased in 1933 and two Monarchs acquired last year.

All the vehicles are engaged on the same class of haulage, which consists principally of the transport of cement and fireclay pipes.

The firm follow no set maintenance scheme, but on certain points they hold definite views. Amongst these are the necessity of employing the bestquality lubricating oil, the advisability of using colloidal graphite at all stages of a vehicle's life, and the advantages of keeping the same driver on the same machine wherever practicable.

Perhaps it is adherence to these practices, coupled with the robust type of chassis employed, that enables Messrs. Clelland and Sons to claim that in all their 17 years of road-transport activity they have only once had to send out to a breakdown. The vehicles are housed in a wellequipped garage, where all maintenance operations are carried out, With the exception of such specialized work as reboring and resleeving of cylinders.

An interesting feature of the van bodies is the provision of portable longitudinal and transverse partitions, enabling each interior to be divided into lour, equal portions. If necessary, a sub-division to eight equal portions can be effected. Access to the load is obtained by double doors at the rear and a door at the forward end on each side of the body. This arrangement 'enables goods for each shop to be kept separate and facilitates loading and unloading. For bulk deliveries to the railway and docks the partitions are removed. found necessary to open a special depot in Edinburgh.

Two other concerns which requisition the company's vehicles are Siemens Electric Co., and Wm. MacDonald and Sons, the well-known biscuit makers.

With justifiable pride, Daniel Duncan, Ltd., claims tn have pioneered, in Glasgow, the use of motor vehicles for delivering newspapers_ This still forms important traffic, . which now comes from Allied Newspapers Publications, Ltd., and two other large Scottish wholesale newsagents. Commers are also used on this work.

The fleet is maintained in the company's own workshopsand each vehicle, without exception, is thoroughly looked over at least once every week. Complete overhauls are regularly undertaken and, as a point of interest, it might be Mentioned that the engines of