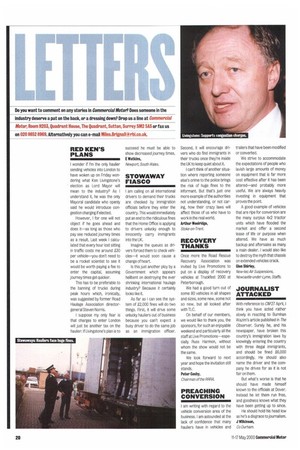 I wonder if I'm the only haulier sending vehicles into London to have woken up on Friday wondering what Ken Livingstone's election as Lord Mayor will mean to the industry? As I understand it, he was the only Mayoral candidate who openly said he would introduce congestion charging if elected.

However, I for one will not object if he goes ahead and does it—as long as those who pay see reduced journey times as a result. Last week I calculated that every hour lost sitting in traffic costs me around £30 per vehicle—you don't need to be a rocket scientist to see it would be worth paying a fee to enter the capital, assuming journey times gat quicker.

This has to be preferable to the banning of trucks during peak hours which, ironically, was suggested by former Road Haulage Association directorgeneral Steven Norris.

I suppose my only fear is that charges to enter London will just be another tax on the haulier: if Livingstone's plan is to succeed he must be able to show decreased journey times. [Watkins, Newport, South Wales.