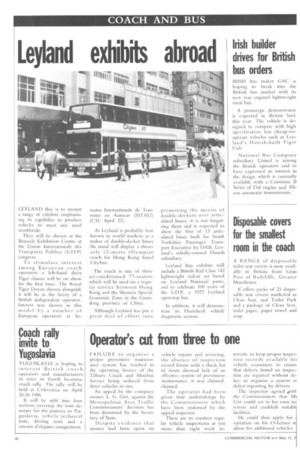 Page 18, 11th May 1985 — Leyland exhibits abroad
Close
Noticed an error?
If you've noticed an error in this article please click here to report it so we can fix it.

LEYLAND Bus is to mount a range of exhibits emphasising its capability to produce vehicles to meet any need worldwide.

They will be shown at the Brussels Exhibition Centre at the Union Internationale des Transports Publics (UITP) congress.

To stimulate interest among European coach operators a left-hand drive Tiger chassis will be on show for the first time. The Royal Tiger Doyen shown alongside it will be in the livery of a British independent operator. Interest was shown in this model by a number of European operators at Se

As Leyland is probably best known in world markets as a maker of double-decker buses the stand will display a threeaxle 12-metre Olympian coach for Hong Kong based City bus.

The coach is one of three air-conditioned 77-seaters which will be used on a regular service between Hong Kong and the Shenzen Special Economic Zone in the Guandong province of China.

Although Leyland has put a great deal of effort into promoting the merits of double-deckers over articulated buses, it is not forgetting them and is expected to show the first of 13 articulated buses built for South Yorkshire Passenger Transport Executive by DAB, Leyland's wholly-owned Danish subsidiary.

Leyland Bus exhibits will include a British Rail Class 142 lightweight railcar set based on Leyland National parts, and to celebrate 100 years of the UITP, a 1922 Leyland open-top bus.

In addition, it will demonstrate its Fleetcheck vehicle diagnostic system.