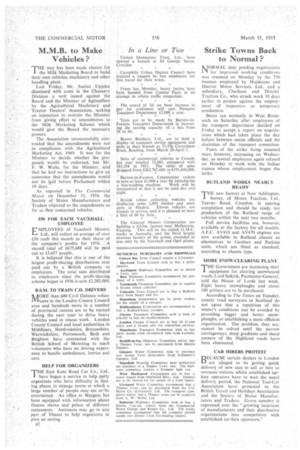 THE way has been made clearer for the Milk Marketing Board to build their own vehicles, machinery and other handling plant.

Last Friday, Mr. Justice Upjohn dismissed with costs in the Chancery Division a writ issued against the Board and the Minister of Agriculture by the Agricultural Machinery and Tractor Dealers' Association, seeking an injunction to restrain the Minister from giving effect to amendments to the Milk Marketing Scheme which would give the Board the necessary powers.

As reported in Tile Commercial Motor on December 31, 1954, the Society of Motor Manufacturers and Traders objected to the amendments so far as they concerned vehicles.

£50 FOR EACH VAUXHALL EMPLOYEE

,TORE than 600 Civil Defence volunalteers in the London County Council area and hundreds more in a number of provincial centres are to be trained during the next year to drive heavy vehicles used in rescue work. London County Council and local authorities in Middlesex, Hertfordshire, Breconshire, Warwickshire, Portsmouth, Bath and Brighton have contracted with the British School of Motoring to teach volunteers who have no driving experience to handle ambulances, lorries and cars.

HELP FOR ORGANIZERS *I'HE East Kent Road Car Co., Ltd., have begun a service to help party organizers who have difficulty in finding places in strange towns at which a large number of people may-eat or be entertained. An office at Margate has been equipped with information about theatre shows and prices of different restaurants. Assistants may go to any part of Thanet to help organizers to plan an outing.