B.E.T. Will Not Sell Out 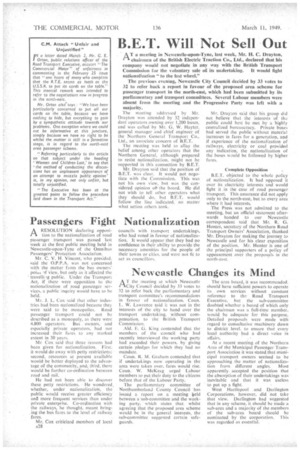 Page 4, 11th March 1949 — B.E.T. Will Not Sell Out
Close
Noticed an error?
If you've noticed an error in this article please click here to report it so we can fix it.
Keywords : Monopoly, Nationalization, United Kingdom, British Transport Commission, British Electric Traction, Newcastle Upon Tyne, England

A T a meeting in Newcastle-upon-Tyne, last week, Mr. H. C. Drayton, 1—k chairman of the British Electric Traction Co., Ltd., declared that his company would not o.egoliate in any way with the British Transport Commission for the voluntary sale of. its undertaking. It would fight nationalization "lo the last wheel."

The previous evening, Newcastle City Council decided by 33 votes to 32 to refer back a report in favour of the proposed area scheme for

passenger transport in the north-east, which had been submitted by its parliamentary and transport committees. Several Labour members were absent from the meeting and the Progressive Party was left with a majority.

[he meeting addressed by Mr. Drayton was attended by 32 independent operators owning over 1,200 buses, and was called by Mr. G. W. Ha3iter, general manager and chief engineer of the Northern General Transport Co., Ltd., an associate concern of 13.E.T.

The meeting was held to allay the belief among other operators that the Northern General, although prepared to resist nationalization, might not be supported in this connection by B.E.T.

Mr. Drayton said that the position of B.E.T. was clear. It would not negotiate with the Commission. This was not his own view, but was the considered opinion of.• the board. He did not wish to tell other operators what they should do, but B.E.T. would follow the line indicated, no matter what action others took,

Mr. Drayton said that his group did not believe that the interests of the public could best be met by .a 'highly centralized bureaucracy. Private buses had served the public without material increasesin fares for a generation, and if experience of the nationalization of railways, electricity or coal provided any indication, the .nationalization of the buses would be followed by higher fares.

B.E.T. objected to the whole policy of nationalization. It had opposed it over its electricity interests and would fight it in the case of road passenger transport. This assurance did not apply only to the north-east, but to every area where it had interests.

The Press was not admitted to the meeting, but an official statement afterwards handed to our Newcastle correspondent said that Mr. R. G. Hunter., secretary of the Northern Road Transport Owners' Association, thanked Mr. Drayton for making the journey to Newcastle and for his clear exposition of the position, Mr. Hunter is one of the principal supporters of a policy of appeasement over the proposals in the north-cast.