The Decision of the House of Lords in the Sharpness Case. 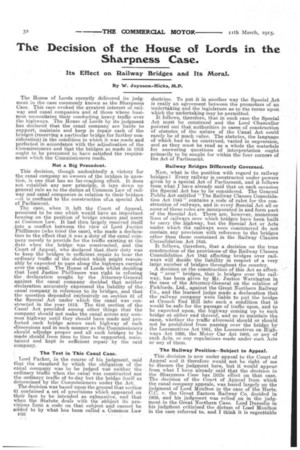 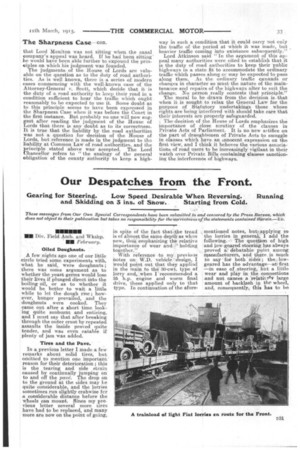 Page 13, 11th March 1915 — The Decision of the House of Lords in the Sharpness Case.
Close
Noticed an error?
If you've noticed an error in this article please click here to report it so we can fix it.
Keywords : Irwell Valley, Canal Restoration, Railway And Canal Traffic Act, Grantham Canal, Law / Crime

Its Effect on Railway Bridges and Its Moral.

The House of Lords recently delivered its judgment in the case commonly known as the Sharpness ease. This case evoked the greatest interest of railway and canal companies and of those whose business necessitates their conducting heavy traffic over the highways. The House of Lords by its judgment has declared that the canal company are liable to support, maintain and keep in repair each of the. bridges (reserving a particular bridge for further consideration) in the. condition in which it was made and perfected in accordance with the adjudication of the . Commissioners and that the bridges as made in 1812 ought to be presumed to have satisfied the requirement which the Commissioners made.

Not a Big Precedent.

This decision, though undoubtedly a victory for the canal company as owners of the bridges in questioh, is one that has no far-reaching effect. it does not establish any new principle, it lays down no general rule as to the duties at Common. Law of railway and canal companies in relation to their bridges —it is confined to the construction of,a. special Act of Parliament.

The case, when it left the Court of Appeal, promised to be one which would have an important bearing on the position of bridge owners and users at Common Law, It had then largely resolved itself ,into a conflict between the view of Lord Justice PhilUnion (who tried the case), who made a declaration to the effect that it was a duty of the canal company merely to provide for the traffic existing at the date when the bridge was constructed, and the 'Court of Appeal, who declared that. their duty was to keep the bridges in sufficient ,repair to hear the ordinary traffic of the district which might reason; ably be expected to pass along the highways carried over the canal. The House of Lords whilst deciding that Lord Justice. PhiIlimore was right in, refusing the declaration sought by the Attorney-General against the canal company decided that neither declaration accurately expressed the liability of the canal company in reference to its bridges, and that the question depended eXclusively on. section 61 of the Special Act under which the canal was constructed in the year 1812. The 61st section of the Canal Act provided among other things that the company s.hould not make the canal across any common highway until they should have made and perfected such bridge across such highway of such dimensions and in such manner as the Commissioners should adjudge proper and all such bridges to be made should from time to time be supported, maintained and kept in sufficient repair by the said company.

The Test in This Canal Case. • Lord Parker, in the course of his judgment, said that the standard by which the obligation of the canal company was to he judged was neither the ordinary traffic when the canal was constructed nor the ordinary traffic of to-day but the bridge itself as determined by the Commissioners under the Act.

• The decision was based upon the ground that section 61 contained a set of provisions which appeared on their face to be intended as exhaustive, and that when the Statute deals with the 'Abject its provisions form a code on that subject and cannot be added to by what has been called a Common Law P30 doctrine. To put it in another way the Special Act is really an agreement between the promoters of an undertaking and the legislature as to the terms upon which the undertaking may be permitted. • It follows, therefore, that in each case the Special Act must be construed and the Lord 'Chancellor pointed out that authorities in cases of construction of statutes of the nature of the Canal Act could rarely be of much value. The statutes, the language of which had to be construed, varied m espression, and as they must be read as a whole the mateitaIs for answering questions of interpretation ought primarily to be sought for within the four corners of the Act of Parliament.

Now, what is the position with regard to railway bridges? Every railway is constructed under powers given by a special Act of Parliament, and it follows from what I have already said that on each occasion the Special Act has to be considered. The General Public Act entitled " The Railway Clauses Consolidation Act 1845" contains a code of rules for the construction of railways, and in every Special Act all or .setne of these rules, are incorporated in and form part of the Special Act. There are, however, numerous lines of railways over which bridges have been built to carry the highway, but the Special Act or Acts under which the railways were constructed do not contain any provision with reference to the bridges other than those contained in the Railway Clauses Consolidation Act 1845.

It follows, therefore, that a decision on the true construction of the provisions of the Railway Clauses Consolidation Act 1845 affecting bridges over railways will decide the liability in respect of a very large number of bridges throughout the country. A decision on the construction of this. Act as affecting " over" bridges, that is bridges over the railway, has been given by Mr. Justice Warrington in the case of the Attorney-General on the relation of Pickfords, Ltd., against the Great Northern Railway Co., and the learned judge made a declaration that the railway company were liable to put the bridge at Crouch End Hill into such a condition that it would be safe for the passage of traffic upon, and to be expected upon, the highway coming up to such bridge at either end thereof, and so to maintain the same, whether the traffic aforesaid should or should not be prohibited from passing over the bridge by the Locomotives! Act 1861, the Locomotives on Highways Act 1896, the Motor Car Act 1903, or any of such Acts, or any regulations made under such Acts or any of them.

The Railway Position—Subject to Appeal.

This decision is now under appeal to the Court of Appeal and it therefore would not be right of me to discuss the judgment here but it would' appear from what I have already said that the decision in the Sharpness Case has little effect on that case. The decision of the Court of Appeal from which the canal company appeals, was based largely on the judgment of Lord Moulton in the ca-se of the Herts. C.O. v. the Great Eastern Railway Co. decided in 1909, and his judgment was relied on in the judgment in the Great Northern Case. Lord Dunedin in his judginent criticised the dictum of Lord Moulton in the case referred to. and I think it is regrettable that Lord Moulton was not sitting when the canal company's appeal was heard. If he had been sitting' he would have been able further to expound the principles on which his judgment was founded. The judgments of the Rouse of Lords are valuable on the question as to the duty of road authorities. As is well known, there is a series of modern cases commencing with the well-known case of the Attorney-General v. Scott, which decide that it is the duty of a road authority to keep their road in a condition sufficient to bear the traffic which ought reasonably to be expected to use it. Some doubt as to this principle seems to have been expressed in the Sharpness. Case when it was before the Court in the first instance. But probably no one will now suggest after reading the judgment of the House of Lords that there is any doubt as to its correctness. It is true that the liability by the road authorities was not a question for decision of the Rouse of Lords, but reference is made in the judgment to the liability at Common Law of road authorities, and the principle stated abovewas accepted. The Lord Chancellor refers to " the analogy -of the general obligation of the county authority to keep a high

way in such a condition that it could carry not only the traffic of the period at which it was made, but heavier traffic coming into existence subsequently!' Lord Atkinson said " In the argument of this ,ap peal many authorities were cited to establish that it is the duty of road authoeities to keep their public highways in a state fit to accommodate the ordinary traffic which passes along or may be expected to pass along them. As the ordinary traffic oroan.ds or changes in character so must the nature of the maintenazece and repairs of the highways alter to suit the change. No person really contests that principle." The moral to be drawn from the decision is athat when it is sought to relax the General Law for the purpose of Statutory undertakings those whose rights-are heing interfered with should take care that their interests are properly safeguarded.

.. The decision of the House of Lords emphasizes the importance of close scrutiny of the clauses in Private Acts of Parliament. It is no new artifice on the part of draughtsmen of Private Acts to smuggle in clauses which have an innocent expression on the first view, and I think it behoves the various associations of road users to be increasingly vigilant in their watch over Private Bills containing clauses sanctioning the interference of highways.