IN A LINE OR TWO. 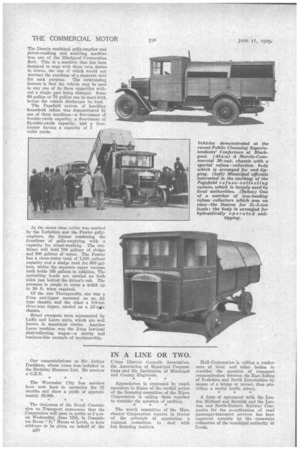 Page 56, 11th June 1929 — IN A LINE OR TWO.
Close
Noticed an error?
If you've noticed an error in this article please click here to report it so we can fix it.
Keywords : Arthur Duckham, Knights Commander Of The Order Of The Bath, Business / Finance

Our congratulations to Sir Arthur Duckham, whose name was included in the Birthday Honours List. He receives a G.B.E.

The Worcester City bus services have now been in operation for 12 months and show a profit of approximately £9,000.

The chairman of the Royal Commission on Transport announces that the Commission will meet in public at 2 p.m. on Wednesday, June 12th, in Committee Room "E," House of Lords, to hear evidence to be given on behalf of the n30 Urban District Councils Association, the Association of Municipal Corporations and the Institution of Municipal and County Engineers.

Appreciation is expressed by coach operators in Ripon of the cordial action of the licensing committee of the Ripon Corporation in calling them together to consider the question of parking.

The watch committee of the Manchester Corporation reports in favour of the principle of appointing a regional committee to deal with bus licensing matters. Hull Corporation is calling a conference of local and other bodies to consider the question of transport communication between the East Riding of Yorkshire and North Lincolnshire by means of a bridge or tunnel, thus providing a useful traffic artery.

A form of agreement with the London Midland and Scottish and the London and North-Eastern Railway Companies for the co-ordination of road passenger-transport services has been approved recently by the tramways coMmittee of the municipal authority at Leeds.