Tesco plans for the Eighties 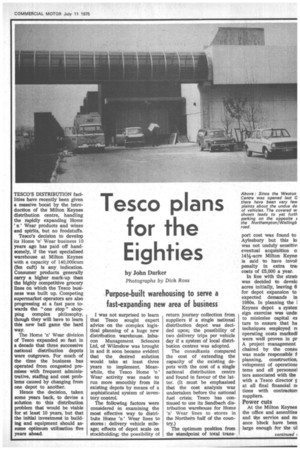 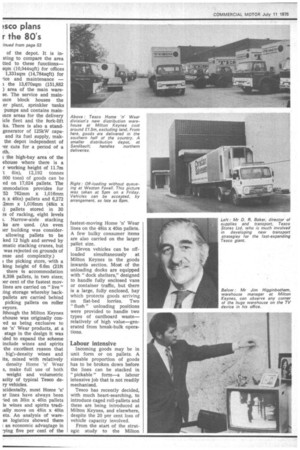 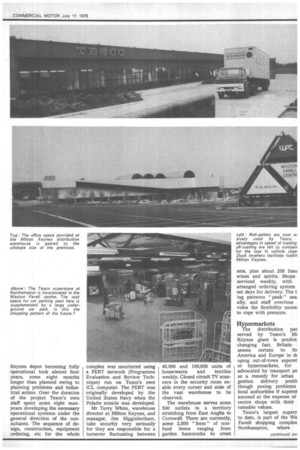 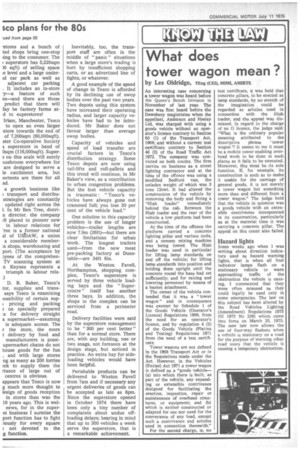 Photographs by Dick Ross TESCO'S DISTRIBUTION facilities have recently been given a massive boost by the introduction of the Milton Keynes distribution centre, handling the rapidly expanding Home n' Wear products and wines and spirits, but no foodstuffs.

The Home 'n' Wear division of Tesco expanded so fast in a decade that three successive national distribution depots were outgrown. For much of the time the business has operated from congested premises with frequent administrative, staffing and cost problems caused by changing from one depot to another.

Hence the decision, taken some years back, to devise a solution to this distribution problem that would be viable for at least 10 years, but that the initial investment in building and equipment should assume optimum utilisation five years ahead. I was not surprised to learn that Tesco sought expert advice on the complex logistical planning of a huge new distribution warehouse. Inbueon Management Sciences Ltd, of Wilmslow was brought in and it soon became evident that the desired solution would take at least three years to implement. MeanWhile, the Tesco Home Wear activity was made to run more smoothly from its existing depots by means of a sophisticated system of inventory control.

The following factors were considered in examining the most effective way to distribute Home 'n' Wear lines to stores.: delivery vehicle mileage; effects of depot scale on stockholding; the possibility of return journey collection from suppliers if a single national distribution depot was decided upon; the possibility of two delivery trips per vehicle day if a system of local distribution centres was adopted.

The consultants compared the cost of extending the capacity of the existing depots with the cost of a single national distribution centre and found in favour of the latter. (It must be emphasised that the cost analysis was undertaken before the national fuel crisis; Tesco has continued to use its Sandbach distribution warehouse for Home 'n' Wear lines to stores in the Northern half of the country.) The optimum position from the standpoint of total trans

Above : Since the Weston Centre was opened last C there have been very few plaints about the undue de of vehicles. The covered w shown leads to yet furth parking on the opposite s the Northampton/Wellingb road.

port cost was found to Aylesbury but this lo was not unduly sensitiv eventual acquisition o: 141/2-acre Milton Keyne is said to have invol7 penalty in extra /ow costs of £5,000 a year.

In line with the stratx was decided to develo acres initially, leaving 6 for depot expansion to expected demands in 1980s. In planning the Keynes depot a systen sign exercise was uncle: to minimise capital ex ture to ensure that ha techniques employed tx operating costs markedl were well proven in pr A project management chaired by the eonsu was made responsible planning, construction, velopment of operationt tems and all personnel ters associated with the with a Tesco director r at all final financial no tions with contractor: suppliers.

At the Milton Keynes the office and amenities and the service and mi ance block have been large enough for the ul of the depot. It is insting to compare the area tted to these functionssqm (10,944sqft) for offices 1,331sqm (14,784sqft) for ice and maintenance — the 13,670sqm (151,882 ) area of the main warese. The service and mainince block houses the er plant, sprinkler tanks pumps and contains mainince areas for the delivery tele fleet and the fork-lift its. There is also a standgenerator of 125kW capaand its fuel supply, makthe depot independent of rer cuts for a period of a ith.

the high-bay area of the ehouse where there is a r working height of 11.7m 't fin), 12,192 tonnes 000 tons) of goods can be ed on 17,024 pallets. The )mmodation provides for 52 762mm x 1,016mm n x 40in) pallets and 6,272 ,2mm x 1,016mm (48in x 1) pallets stored in 30 of racking, eight levels I. Narrow-aisle stacking ks are used. (An even ler building was considerallowing pallets to be ked 12 high and served by )matic stacking cranes, but was rejected on grounds of anse and complexity.) I the picking store, with a king height of 6.6m (21ft there is accommodation 8,398 pallets, in two sizes; >er cent of the fastest movlines are carried on " live" aing storage whereby backpallets are carried behind picking pallets on roller veyors.

ithough the Milton Keynes ehouse was originally con • ed as being exclusive to ne 'n' Wear products, at a stage in the design it was [tied to expand the scheme include wines and spirits the excellent reason that hig:i-density wines and its, mixed with relatively density Home 'n' Wear s, make full use of both weight and volumetric acity of typical Tesco dery vehicles.

lcidentally, most Home 'n' ar lines have always been 'led on 30in x 40in pallets le wines and 'spirits tradi[ally move on 48in x 401n ets. An analysis of warese logistics showed there an economic advantage in Ting five per cent of the fastest-moving Home 'n' Wear lines on the 48in x 40in pallets. A few bulky consumer items are also carried on the larger pallet size.

Eleven vehicles can be offloaded simultaneously at Milton Keynes in the goods inwards section. Most of the unloading docks are equipped with "dock shelters," designed to handle fully enclosed vans or container traffic, but there is a large, fully enclosed, bay which protects goods arriving on flat-bed lorries. Two " flush " unloading positions were provided to handle two types of cardboard waste— relatively of high value—generated from break-bulk operations.

Incoming goods may be in unit form or on pallets. A sizeable proportion of goods has to be broken down before the lines can be stacked in " pickable " form—a labour intensive job that is not readily mechanised.

Tesco has recently decided, with much heart-searching, to introduce caged roll-pallets and these are being introduced at Milton Keynes, and elsewhere, despite the 20 per cent loss of vehicle capacity involved.

From the start of the strategic study to the Milton Keynes depot becoming fully operational took almost four years, some eight months longer than planned owing to planning problems and industrial action. Over the duration of the project Tesco's own Staff spent some eight manyears developing the necessary operational systems under the general direction of the consultants. The sequence of design, construction, equipment ,ordering, etc for the whole complex was monitored using a PERT network (Programme Evaluation and Review Technique) run on Tesco's awn ICL computer. The PERT was originally developed by the United States Navy when the Polaris missile was developed.

Mr Terry White, warehouse director at Milton Keynes, and manager, Jim Higginbotham, take security very seriously for they are responsible for a turnover fluctuating between 40,000 and 100,000 units of housewares and textiles weekly. Closed circuit TV scanners in the security room enable every corner and aisle of the vast warehouse to be observed.

The warehouse serves some 500 outlets in a territory stretching from East Anglia to Cornwall. There are currently, some 2,500 " lines " of nonfood items ranging from garden hammocks to cruet sets, plus about 250 line:. wines and spirits. Shops serviced weekly, with arranged ordering system set days for delivery. The t ing patterns " peak " sea: ally, and staff overtime vides the flexibility neces: to cope with pressure.

The distribution pat served by Tesco's Mi Keynes giant is predict, changing fast. Britain seems certain to fa America and Europe in clf oping out-of-town superst OT hypermarkets, for advocated by transport pe as a remedy for urban gestion delivery probli though posing problems local authorities if superst succeed at the expense of centre shops with their rateable values.

Tesco's largest supers' to date, is part of the We Favell shopping complex Northampton, where stores and a bunch of ted shops bring one-stop )ing to the consumer. The • superstore has 5,220sqm )0 .sqft) of selling space e level and a large underid car park as well as adjacent car parking . It includes an in-store y—a feature of such es—and there are those predict that there will lay be factory farms atd to superstores!

Irlarn, Manchester, Tesco to open an even larger .store towards the end of of 7,200sqrn (80,000sqft). ster Co-operative Society a superstore in hand of Osqm (116,000sqft). Supers on this scale will surely aushroom everywhere for are designed to serve a le catchment. area, but Katents are there for all ad.

a growth business like ) transport and distribustrategies are constantly updated right across the l. In Mr Ben Tree, distrin director, the company dl placed to pioneer new in labour relations for 'ree is a former national A of USbAW, a union a considerable memberLn shops, warehousing and port. (The acceptance by )yees of the comprehenTV scanning system at Keynes represents a triumph in labour rela) D. R. Baker, Tesco's tor, supplies and transsays Tesco is examining • ossibility of certain sup; pricing and packing s on specially prepared :s for delivery straight a supermarket—assuming is adequate access. The r the store, the more t delivery by food and manufacturers is possiupermarket chains do not house goods for the fun , and with large stores ng as many as 200 lorries ek to supply them the rtance of large out of centres is obvious.

appears that Tesco is now g much more thought to lesign of goods reception in stores than was the 10 years ago. This is we!news, for in the superet business I surmise the port function has to fight dously for every square not devoted to the ,g function. Inevitably, too, the transport staff are often in the middle of " panic " situations when a large store's trading is hurt by insufficient shopping carts, or an advertised line of tights, or whatever.

A good example of the speed of change in Tesco is afforded by its declining use of swop bodies over the past two years. Two depots using this system have increased their operating radius, and larger capacity vehicles have had to be introduced. Mr Baker does not favour larger than• average swop bodies.

Capacity of vehicles and speed of load transfer are crucial factors in Tesco's distribution strategy. Some Tesco depots are now using tail-lifts and roll-pallets and this trend will continue, in Mr Baker's view, as a contribution to urban congestion problems. But the lost vehicle capacity is traumatic : "Tesco's vehicles have always gone out crammed full; you lose 30 per cent of the vehicle load."

One solution to this capacity problem is the use of longer vehicles—trailer lengths are now 7.9m (26ft)—but there are clear limitations for urban work. The longest trailers used—from the new meat pre-packing factory at Dunstable—are 34ft 6in.

At the Weston Favell, Northampton, shopping complex, Tesco's superstore is served by three vehicle loading bays and the " Supercentre " itself has another three bays. In addition, the shops in the complex can be serviced from a perimeter road.

Delivery facilities were said by the superstore management to be "300 per cent better" than for a normal store. There are, with any building, one or two snags, not foreseen at the design stage, but noticed in practice. An extra bay for sideloading vehicles would have been helpful.

Perishable products can be delivered to Weston haven from 7am and if necessary any urgent deliveries of goods can be accepted as late as 8pm. ' Since the superstore opened in October 1974 there have been only a tiny number of complaints about undue offloading delays; bearing in mind that up to 300 vehicles a week serve the superstore, that is a remarkable achievement,