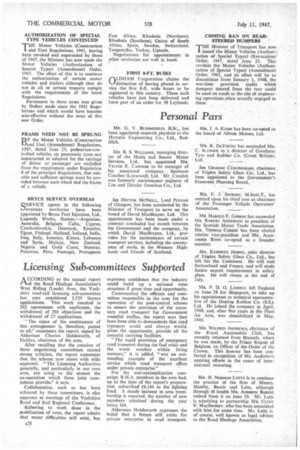 Page 30, 11th July 1947 — Personal Pars
Close
Noticed an error?
If you've noticed an error in this article please click here to report it so we can fix it.
Keywords : Politics

SIR HECTOR MCNEILL, Lord Provost of Glasgow, has been nominated by the Minister of Transport to serve on the board of David MacBrayne, Ltd. This appointment has been made under a contract concluded last month between the Government. and the company, by which David MacBrayne, Ltd., provides for the maintenance of certain transport services. including the conveyance of mails, in the Western Highlands and Islands of Scotland. Mn. J. A. KEMP has been co-opted to the board of Albion Motors, Ltd.

SIR GRAHAM CUIVNINCHAM, chairman a Triplex Safety Glass Co., Ltd., has been appointed to the Government's Economic Planning Board., MR. F. J: SPEIGHT, M.INST.T., has entered Upon his third year as chairman of the Passenger. Vehicle Operators' Association.

MR. KENNETH HOME, sales director of Triplex Safety Glass Co. Ltd., has left for the Continent. He will visit Switzerland and France, and will study future export requirements in safety glass. He will return at the end of July.

MR. P. D. 0. LIDDELL left England on June 28 for Singapore, to take up his appointment as technical representative of the Dunlop Rubber Co. (S.S.), Ltd. He joined the company in April, 1940, and, after five years in the Fleet A19i4r6.Arm, was demobilized in May, Mn. WILFRID ANDREWS, chairman of the Royal Automobile Club, has recently returned from Brussels, where he was made, by the Prince Regent of Belgium, an Officer of the Order of the Crown. This honour has been conferred in recognition of Mr. Andrews's untiring efforts in the cause of international motoring.

MR. H. NORMAN LETTS is to continue the practice of the firm of Messrs. Mawby, Barrie and Letts, although through ill health MR. ANDREW BARRIE retired from it on June 30. Mr. Letts is admitting to partnership MR. Cunt; V. MACSWENEY, who has been associated with him for some time. Mr. Letts is, of course, well known as legal adviser to the Road Haulage Association.