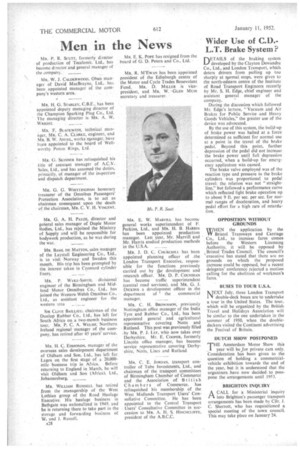 WHEN the application by the W Bristol Tramways and Carriage Co., Ltd., to increase fares comes before the Western Licensing Authority, it will be opposed by Bristol Trades Council. The council's 'executive has stated that there are no grounds on which the proposed increase could be opposed, but a recent delegates' conference rejected a motion calling for the abolition of workmen's fares. '

NEXT July, three London Transport double-deck buses are to undertake a tour in the United States. The tour. which will be organized by the British Travel and Holidays Association will be similar to the one undertaken in the summer of 1950, when the doubledeckers visited the Continent advertising the Festival of Britain.

THE Amsterdam Motor Show this year will be for private cars only. Consideration has been given to the question of holding a commercialvehicle exhibition towards the end of the year, but it is understood that the organizers have now decided. to postpone the arrangements until 1953.

ACALL for a Ministerial inquiry into Brighton's passenger transport arrangements has been made by Cllr. J. C. Sherrott, who has requisitioned a special meeting of the town council. This may take place on January 24.