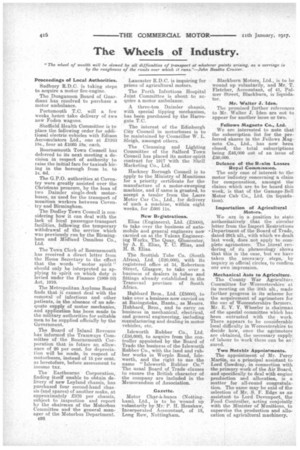 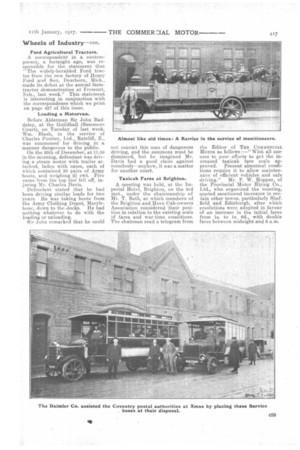 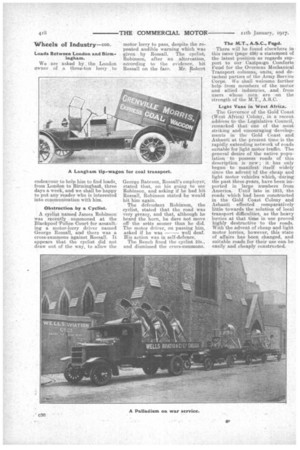 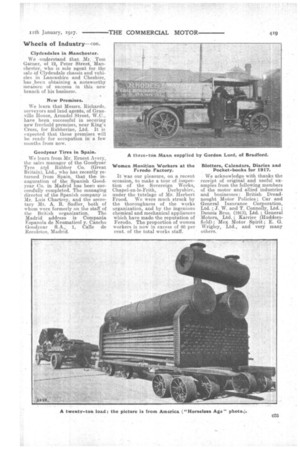 The wheel of wealth will be slowed by all difficulties of transport at whatever points arising, as a carriage is by the roughness of the roads over which it runs."—John Beattie Crozier.

Sudbury R.D.C. is taking steps to acquire a motor fire-engine.

The Dungannon Board of Guardians has resolved to purchase a motor ambulance.

Sheffield Health Committee is to place the following order for additional electric vehicles with Edison Accumulators Ltd., one at 21203 18s,, four at £1065 18s. each.

Bournemouth Town Council has deferred to its next meeting a decision in respect of authority to raise the initial fare for taxicab hiring in the borough from is. to is_ Q.

The G.P.O. authorities at Coventry were greatly assisted over the Christmas pressure, by the loan of two Daimler single-deck motorbuses, as used for the transport of munition workers between Coventry and Birmingham.

The Dudley Town Council is considering how it can deal with the lack of local passenger-transport facilities, following the temporary withdrawal of the service which was previously run by the Birmingham and Midland Omnibus Co., Ltd.

The Town Clerk of Bournemouth has received a direct letter from the Home Secretary to the effect that the words "motor spirit" should only be interpreted as applying to spirit on which duty is levied under the Finance (1909-10) Act, 1910.

The Metropolitan Asylums Board finds that it cannot deal with the removal of infectious and other patients, in the absence of an adequate supply of motor mechanics, and application has been made to the military authorities for suitable men to be supplied officially by the Government.

The Board of Inland Revenue has informed the Tramways Committee of the Bournemouth Corporation that in future an allowance of 20 per cent, for depreciation will be made, in respect of motorbuses, instead of 15 per cent. as heretofore, before assessment to income tax.

The Eastbourne Corporation, finding itself unable to obtain delivery of new Leyland chassis, has purchased four second-hand chassis (and spares) of another make, at approximately 2370 per chassis, subject to inspection and report by the chairman of the Motorbus Committee and the general manager of the Motorbus Department.

026 Lancaster R.D.C. is inquiring for prices of agricultural motors.

The Perth Infectious Hospital Joint Committee is about to acquire a motor ambulance.

A three-ton Daimler chassis, with special tipping mechanism, has been purchased by the Harrogate T.C.

The interest of the Edinburgh City Council in motorbuses is to be maintained by Councillor W. L. Sleigh, amongst others.

The Cleansing and Lighting Committee of the Salford Town Council has placed its motor-spirit contract for 1917 'with the Shell Marketing Co., Ltd_

Hackney Borough Council is to apply to the Ministry of Munitions for a priority certificate for the manufacture of a motor-sweeping machine, and if same is granted, to accept a tender from the Lacre Motor Car Co., Ltd., for delivery of such a machine, within eight weeks, for 2666 us.

Elias (Engineers), Ltd. (23000), to take over the business of automobile and general engineers now carried on at the Vulcan Engineering Works, The Quay, Gloucester, by A. E. Elias, T. C. Elias, and H. S. Elias.

The Scottish Tube Co. (South Africa), Ltd. (X20.000), with its registered office at 34, Robertson Street, Glasgow, to take over a business of dealers in tubes and fittings already established in the Transvaal province of South Africa.

Hibbard Bros., Ltd. (25000), to take over a business now carried on at Basingstoke, Hants., as Messrs. Hubbard, Bros., and to carry on business in mechanical, electrical, and general engineering, including manufacturing and dealing in motor vehicles, etc.

Blackburn Motors, Ltd. is to be wound up voluntarily, and Mr. T. Fletcher, Accountant, of 41, Palmer Street, Blackburn, is liquidator.

The promised further references to Mr. Walter J. Iden are not to appear for another issue or two.

We are interested to note that the subscription list for the preferred shares in the Fellows Magneto Co., Ltd., has now been closed, the total subscriptions being 246,000 •out of an issue of 250,000.

The only case of interest to the motor industry concerning a claim for compensation, amongst the claims which are to be heard this week, is that of the Gamage-Bell Motor Cab Co., Ltd. (in • liquidation).

• Department of the Board of Trade, dated 29th ult., with which we dealt last week, does not apply to complete agrimotors. The literal rendering of its phraseology shows that this is the case, but we have taken the necessary steps, by inquiry in official circles, to confirm our own impression.

The County War Agriculture Committee for Worcestershire at its meeting on the 30th ult., made further progress in its scheme for the acquirement of agrimotors for the uss of Worcestershire farmers. Mr. E. V. V. Wheeler is chairman of the special committee which has been entrusted with the work. There appears to be considerable local difficulty in Worcestershire to decide how, once the agrimotors are obtained, the necessary supply of labour to work them can be as sured.

The appointment of Mr. Percy Martin, as a principal assistant to Lord Oowdray, in connection with the primary work of the Air Board, and specifically to deal with engine production and allocation, is a matter for all-round congratulation. The same may be said of the selection of Mr. S. F. Edge as an assistant to Lord Devonport, the Food Controller, acting conjointly with the Minister of Munitions, to supervise the production and allocation of agricultural machinery. Ford Agricultural Tractors.

A correspondent in a .contemporary, a fortnight ago, we responsible for the statement that "The widely-heralded Ford tractor from the new factory of Henry Ford and Son, Dearborn, Mich., made its debut at the annual farmtractor demonstration at Fremont, .Neb., last week." This statement is interesting in conjunction with the correspondence which we print on page 427 of this issue.

Before Alderman Sir John Baddeley, at the Guildhall (Summons Court), on Tuesday of last week, Win. Blasi), in the service of Charles Poulter, Ltd., Ratcliff, E., was summoned for driving in a manner dangerous to the public. On the 20th of December, at 11.50 in the morning, defendant was driving a steam motor with trailer attached, laden with cases, each of which contained 50 pairs of Army boots, and weighing 234, cwt. 'Five cases from the top tier fell off, injuring Mr. Charles Davis. Defendant stated that he had been driving similar loads for two years. He was taking boots from the Army Clothing Depot, Marylebone, down to the docks. He had nothing whatever to do with the loading or unloading. Sir John remarked that he could not convict this man of dangerous driving, and the summons must be dismissed, but he imagined Mr. Davis had a good claim against somebody—anyhow, it was a matter for another court.

A meeting was held, at the Imperial Hotel, Brighton, on the 3rd inst., under the chairmanship of Mr. T. Bath, • at which members of the Brighton and ore Cab-owners Association considered their position in relation to the existing scale of fares and war-time conditions. The chairman read a telegram from the Editor of Tilt COMMERCIAL MOTOR as follows : —" Wish all success to your efforts to get the increased taxicab fare scale approved. Present abnormal conditions require it to allow maintenance of efficient vehicles and safe driving." Mr. F. W. Hopper, of the Provincial Motor Hiring Co., Ltd.' who organized the meeting, quoted sanctioned increases in certain other towns, particularly Sheffield and Edinburgh, after which resolutions were adopted in favour of an increase in the initial fares from is. to is. 6d. with double fares between midniglit and 8 a.m.

Loads Between London and Birmingham.

We are asked by .. the • London owner of a three-ton lorry , to endeavour to help him to find loads, from London to Birminghath, three days a week, and we shall be happy to put any reader who is interested into communication with him.

Obstruction by a Cyclist.

A cyclist named James Robinson was recently summoned at the Blackpool Police Court for assaulting a motor-lorry driver named George Rossall, and there was a cross-summons against Rossall. It appears that the cyclist did not draw out of the way, to allow the motor lorry to pass, despite the repeated audible warning which was given by Rossall. The cyclist, Robinson, after an altercation, according to the evidence, hit Rossall on the face. Mr. Robert George Bateson, Rossall's employer, stated that, on his going to see Robinson, and asking if he had hit Rossall, Robinson stated he would hit him again. The defendant Robinson, the cyclist, stated that the road was very greasy, and that, although he heard the horn, he dare not move off the setts sooner than he did. The motor driver, on passing him, asked if he was — well deaf. His action was in self-defence.

The Bench fined the •cyclist and dismissed the cross-summons. The M.T., A.S.C., Ftwd.

There will be found elsewhere in this issue (page 426). a statement of the latest position as regards support to our Campaign Comforts _Cued for the Overseas Mechanical Transport columns, units, and detachect parties of the Army Service Corps. We shall welcome further help from members of the motor and • allied industries, and from users whose men are on the strength of the M.T., A.S.C.

The Governor of the Gold. Coast (West Africa) Colony, in a. recent address to the Legislative Council, remarked that tine of the most striking and encouraging developments in the Gold Coast and Ashanti at the present time is the rapidly extending network of roads suitable for light motor traffic. The general desire of the native population to possess roads of this description is new ; it has only begun to manifest itself widely sine the advent of the cheap and light motor vehicles which, during the past three .years, have been imported in large numbers from America. Until late in 1913, the roads which had been constructed in the Gold Coast Colony and Ashanti effected comparatively little towards the solution of local transport difficulties, as the heavy lorries at that time in use proved highly destructive to the roads. With the advent of cheap and light motor lorries, however, this state of affairs has been changed, and suitable roads for their use-can be easily and cheaply constructed.

Wheels of Industry—con. Clydesdales in Manchester.

We -understand that .Mr. Torn Garner, of 12, Peter Street, Manchester, who is sole agent for the sale of Clydesdale chassis and vehicles in Lancashire and Cheshire, has been obtaining a noteworthy measure of success in this new branch of his business.

We learn that Messrs. Richards. surveyors and land agents, of Granville House, Arundel Street, 'W.C., have been successful in securing new freehold premises, near King's Cross, for Rubberine, Ltd. It is expected that these premises will be ready for occupation in a few months from now.

We learn from Mr. Ernest Avery, the sales manager 4f the Goodyear Tyre anji Rubber Co. (Great Britain), Ltd., who has recently returned from Spain, that the inauguration of the Spanish Goodyear Co. in Madrid has been successfully completed. The managing director of the Spanish company is Mr. Luis Chartrey, and the secretary Mr. A. R. Sadler, both of whom were formerly on the staff of the British organization. The Madrid address is Compa,nia Espanola de Neumaticol y. Cancho Goodyear S.A.; 1, Calle de Recoletos, Madrid. Women Munition Workers at the Fe rode Factory.

It was our pleasure, on a recent occasion, to make a tour of inspection of the Sovereign Works, Chapel-en-le-Frith, Derbyshire, under the tutelage of Mr. Herbert Frood. We were much struck by the thoroughness of the works organization, and by the ingenious chemical and mechanical appliances which have made the reputation of Ferodo. The proportion of women workers is now in excess of 60 per cent. of the total works staff. Blotters Calendars, Diaries and Pocket-books for 1917.