A split step for mankind 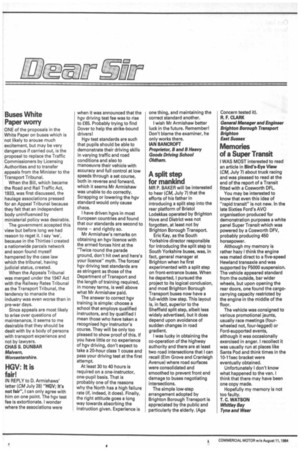 Page 24, 11th August 1984 — A split step for mankind
Close
Noticed an error?
If you've noticed an error in this article please click here to report it so we can fix it.
Keywords : Brighton And Hove, Monarch's Way, Buses, Double-decker Buses, Bristol Lodekka, Brighton, Hove

MR P. BAKER will be interested to hear (CM, July 7) that the efforts of his father in introducing a split step into the rear platform of Bristol Lodekkas operated by Brighton Hove and District was not forgotten, at least not by Brighton Borough Transport.

Eric Kay, as the South Yorkshire director responsible for introducing the split steP to South Yorkshire buses, was, in fact, general manager at Brighton when he first experimented with a split step on front-entrance buses. When he departed, I pursued the project to its logical conclusion, and most Brighton Borough Transport buses now have a full-width low step. This layout is, in fact, superior to the Sheffield split step, albeit less widely advertised, but it does depend upon avoidance of sudden changes in road gradient.

I was lucky in obtaining the co-operation of the highway authority and there are at least two road intersections that I can recall (Elm Grove and Cranleigh Avenue) where road surfaces were consolidated and smoothed to prevent front end damage to buses negotiating intersections.

The simple low-step arrangement adopted by Brighton Borough Transport is appreciated by the public and particularly the elderly. (Age Concern tested it).