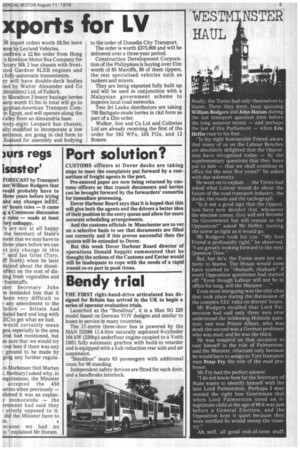 Really, the Tories had only themselves to blame. There they were, busy quizzing William Rodgers and John Horam during the last transport question time before the long summer recess — and perhaps the last of this Parliament — when Eric Heffer rose to his feet.

"Is my right honourable Friend aware that many of us on the Labour Benches are absolutely delighted that the Opposition have recognised today — by the supplementary questions that they have put to him — that we shall continue in office for the next five years?" he asked with due solemnity.

He went on to explain ... the Tories had asked what Labour would do about the future of the road transport industry, the docks, the roads and the tachograph.

"Is it not a good sign that the Opposition have now decided that, whenever the election comes, they will not become the Government but will remain as the Opposition?" asked Mr Heffer, turning the screw as tight as it would go.

Mr Rodgers took his cue. "My hon Friend is profoundly right," he observed. "I am greatly looking forward to the next Question Time."

But, fair do's, the Tories were not entirely to blame. The House would soon have started to "rhubarb, rhubarb" if every Opposition questioner had started off: "Even though Labour will not be in office for long, will the Minister ..."

Even more intriguing was the chit-chat that took place during the discussion of the complex EEC rules on drivers' hours.

Mr Rodgers recalled that Lord Palmerston had said only three men ever understood the Schleswig-Holstein question: one was Prince Albert, who was dead; the second was a German professor who was mad; and he was the third.

He was tempted on that occasion to cast himself in the role of Palmerston, said the Minister, reluctant only because he would have to assign to Tory transport man Peter Fry the role of the mad professor.

Mr Fry had the perfect answer. "I do not know how far the Secretary of State wants to identify himself with the late Lord Palmerston. Perhaps I may remind the right hon Gentleman that when Lord Palmerston sired an illegitimate child at the age of 80 it was just before a General Election, and the Opposition kept it quiet because they were terrified he would sweep the country.,t Ah. well, all good end-of-term stuff.