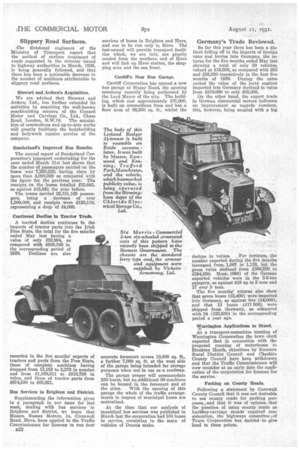 Page 36, 11th August 1931 — Slippery Road Surfaces.
Close
Noticed an error?
If you've noticed an error in this article please click here to report it so we can fix it.

The divisional engineers of the Ministry of Transport report that the method of surface treatment of roads suggested in the circular issued to highway authorities in March, 1.929, is being generally followed, and that there has been a noticeable decrease in the number of accidents attributable to slippery road surfaces.

We are advised that Stewart and Ardern, Ltd., has further extended its activities by acquiring the well-known coachbuilding concern of the Cunard Motor and Carriage Co., Ltd., Chase Road, London, N.W.10. The acquisition of commodious and up-to-date works will greatly facilitate the bodybuilding and bodywork repairs service of the company.

The annual report of Sunderland Corporation's transport undertaking for the year ended March 31st last shows that the number of passengers carried on the buses was 7,268,220, having risen by more than 4,000,000 as compared with the figure for the previous year. The receipts on the ,buses totalled £33,645, as against 115,591 the year before.

A marked decline continues In the imports of tractor parts into the Irish Free State, the total for the .five roc-oaths ended May last having value of only £52,004, as compared with 1639,760 in the corresponding period of 1930. Declines are also

Bus Services in Brighton and District.

Supplementing the information given in a paragraph in our issue for last week, dealing with bus services in Brighton and district, we learn that Messrs. Sussex Motors, la, Cromwell Road, Hove, have applied to the Traffic Commissioners for licencee to run four

B22 services of buses in Brighton and Rove, and one to be run only in Hove. The last-named will provide transport facilities which, we are told, are greatly needed from the northern end of Hove and will link up Hove station, the shopping area and the sea front.

Cardiff Corporation has opened a new bus garage at Stoner Road, the opening ceremony recently being performed by the Lord Mayor of the city. The building, which cost approximately £37,000, is built on commodious lines and has a floor area of 66,250 sq. ft., whilst the concrete forecourt covers 19,500 sq. ft., a further 7,000 sq. ft. at the west side of the garage being intended for storage purposes when not in use as a roadway.

The garage proper will accommodate 150 buses, but an additional 50 machines can be housed in the forecourt and at the sides. With the opening of this garage the whole of the traffic arrangements in respect of municipal buses are centralised.

At the time that our analysis of municipal bus services was published in March last the corporation had 104 buses in service, consisting in the main of vehicles of Dennis make.

So far this year there has been a distinct falling off in the imports of foreign vans and lorries into Germany, the returns for the five months ended May last showing a total of only 50 vehicles, valued at £19,550, as compared with 203 and £58,250 respectively in the first five months of 1930. During the same period the value of the lorry engines imported into Germany declined in value from £219,000 to only 165,060.

On the other hand, the export trade in German commercial motors indicates an improvement as regards numbers, this, hoWever, being coupled with a big decline in values. For instance, the number exported during the five months increased from, 1,007 to 1,126, but the gross value declined. from 1396,500 to £294,550. Most; (600) of the German exported vehicles were in the 2-5-ten category, as against 419 up to 2 tons and 17 over 5 tons.

At a transport-committee meeting of Warrington Corporation the town clerk reported that in connection with the proposed running of motorbuses to Stockton Heath, objections by Runcorn Rural District Council and Cheshire County Council have been withdrawn and that the Traffic Commissioners will now consider at an early date the application of the corporation for licences for• the service.

Following a statement by Cornwall County Council that it was not desirable to use county roads for parking purposes,and that it was of opinion that the question of using county roads as hackney-carriage stands required consideration, the highways committee of Truro Corporation has decided to give heed to these points.