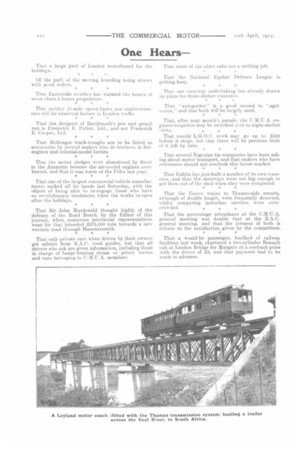 Page 6, 11th April 1912 — One Hears—
Close
Noticed an error?
If you've noticed an error in this article please click here to report it so we can fix it.
Keywords :

That a large part of London inotorbused for the holidays.

Of the path of the moving hoarding being strewn with good orders.

That Eastertide weather has warmed the hearts of some chars -à-banes proprietors.

That neither 10 mile speed-limits nor trailer-tramcars will be admitted factors in London traffic.

That the designer of Hardtrinth's pen and pencil van is Frederick E. Potter, Ltd., and not Frederick E. Cooper, Ltd,

That McGregor track-troughs are to be listed as accessories by several makers who do business in fireengines and colonial-model lorries.

That the motor sledges were abandoned by Scott in the Antarctic because the air-cooled engines overheated, and that it was warm at the Poles last year.

That one of the largest commercial-vehicle manufacturers sacked all its hands last Saturday, with the object of being able to re-engage those who have no revolutionary tendencies when the works re-open after the holidays.

That Sir John Macdonald thought highly of the defence of the Road Board, by the Editor of this journal, when numerous provincial representatives went for that intended 2875,000 vote towards a new western road through Hammersmith.

That only private cars when driven by their owners get salutes from 11.A.C, road guides, but that all drivers who ask are given information, including those in charge of badge-bearing steam or petrol lorries and vans belonging to C.M.T.J.A. members. That sonic of tile older cabs are a rattling job.

That the National Equine Defence League. is getting busy.

That one tramway undertaking has already drawn up plans for three-decker tramcars.

That "autoportcr" is a good second to " agrimotor," and that both will be largely used.

That, after next month's parade, the C.M.U.A. engineer-inspector may be switched over to night-shelter visits.

That unsold L.G.O.C. stock may go up to 1500 before it stops, but that there will be precious little of it left by then.

That several Nigerian tin companies have been asking about motor transport, and that makers who have references should not overlook this latest market.

That Dublin has just built a number of its own tramcars, and that the doorways were not big enough to get them omit of the shed when they were completed.

That the Easter trains to Thames-side resorts, although of double length, were frequently deserted, whilst competing motorbus services were overcrowded.

That the percentage attendance at the C.M.U.A. general meeting was double that at the R.A.C. general meeting, and that the lowness of both is tribute to the satisfaction given by the committees.

That a would-be passenger, baulked of railway .facilities last week, chartered a two-cylinder Renault cab at London Bridge for Margate at a contract price with the driver of £5, and that payment had to be made in advance.