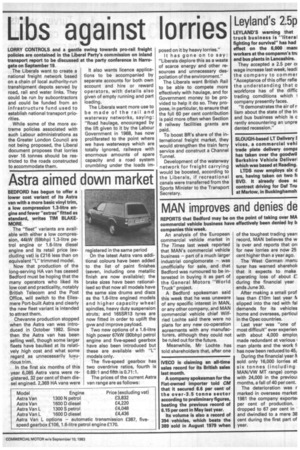 BEDFORD has begun to offer a lower cost variant of its Astra van with a more basic vinyl trim, a low compression 1.3-litre engine and fewer "extras" fitted as standard, writes TIM BLAKEMORE.

The "fleet" variants are available with either a low compression, 44kW (59bhp) 1.3-litre petrol engine or 1.6-litre diesel engine and its retail price (excluding vat) is £216 less than on equivalent "L" trimmed model.

Now that production of the long-serving HA van has ceased Bedford must be hoping that the many operators who liked its low cost and practicality, notably British Telecom and the Post Office, will switch to the Ellesmere Port-built Astra and clearly the new fleet variant is intended to attract them.

Chevanne production stopped when the Astra van was introduced in October 1982. Since then the Astra van has been selling well, though some larger fleets have baulked at its relatively high cost and what some regard as unnecessarily luxurious trim.

In the first six months of this year 6,085 Astra vans were registered, 32 per cent of them diesel engined. 2,369 HA vans were registered in the same period On the latest Astra vans additional colours have been added to the list of paint finishes (seven, including one metallic finish are now available); the brake sizes have been rationalised so that now all models have the same size drums and discs as the 1.6-litre engined models and higher capacity wheel spindles, heavy duty suspension struts; and 165SR13 tyres are now fitted in order to uplift the gvw and improve payload.

Two new options of a 1.6-litre high power 67kW (90bhp) petrol engine and five-speed gearbox have also been introduced but these are available with "L" models only.

The prices of the current Astra van range are as follows: