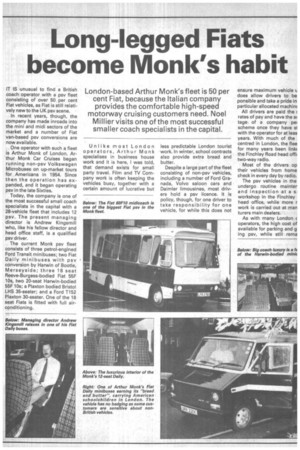 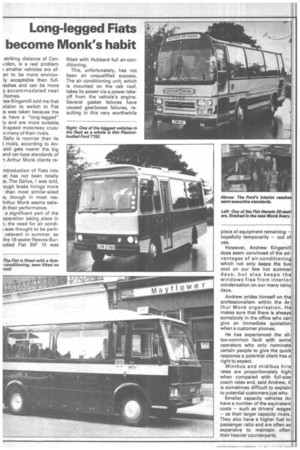 London-based Arthur Monk's fleet is 50 per cent Fiat, because the Italian company provides the comfortable high-speed motorway cruising customers need. Noel Millier visits one of the most successful smaller coach specialists in the capital.

IT IS unusual to find a British coach operator with a psv fleet consisting of over 50 per cent Fiat vehicles, as Fiat is still relatively new to the UK psv scene.

In recent years, though, the company has made inroads into the mini and midi sectors of the market and a number of Fiat van-based psv conversions are now available.

One operator with such a fleet is Arthur Monk of London. Arthur Monk Car Cruises began running non-psv Volkswagen Microbuses on up-market tours for Americans in 1954. Since then the operation has expanded, and it began operating psv in the late Sixties.

Today, the company is one of the most successful small coach specialists in the capital with a 28-vehicle fleet that includes 12 psv. The present managing director is Andrew Kingsmill who, like his fellow director and head office staff, is a qualified psv driver.

Despite a large part of the fleet consisting of non-psv vehicles, including a number of Ford Granada, Volvo saloon cars and Daimler limousines, most drivers hold a psv licence. It is policy, though, for one driver to take responsibility for one vehicle, for while this does not

ensure maximum vehicle u does allow drivers to be ponsibie and take a pride in particular allocated machin( All drivers are paid the rates of pay and have the a( tage of a company pel scheme once they have Si with the operator for at leas years. With much of the centred in London, the flee for many years been link( the Finchley Road head off', two-way radio.

Most of the drivers op their vehicles from home check in every day by radio.

The psv vehicles in the undergo routine mainter and inspection at a SI workshop in the Finchley head office, while more r work is carried out at man turers main dealers.

As with many London c operators, the high cost of available for parking and g ing psv, while still rema

striking distance of CenIndon, is a real problem smaller vehicles are ofen to be more environly acceptable than full:aches and can be more y accommodated near homes.

-ew Kingsmill told me that :cision to switch to Fiat :s was taken because the :s have a "long-legged" ty and are more suitable h-speed motorway cruisn many of their rivals.

Daily is roomier than its t rivals, according to Anand gets nearer the big and car-type standards of I Arthur Monk clients re introduction of Fiats into !et has not been totally ;s. The Dailys, I was told, .ough brake linings more than most similar-sized !s, though in most res\rthur Monk seems satisth their performance.

a significant part of the operation taking place in 1, the need for air condi! was thought to be partirelevant in summer, so the 18-seater Reeves-Burodied Fiat 55F 10 was fitted with Hubbard full air-conditioning.

This, unfortunately, has not been an unqualified success. The air conditioning unit, which is mounted on the cab roof, takes its power via a power takeoff from the vehicle's engine. Several gasket failures have caused gearboxes failures, resulting in this very worthwhile piece of equipment remaining — hopefully temporarily — out of use.

However, Andrew Kingsmill does seem convinced of the advantages of air-conditioning which not only keeps the bus cool on our few hot summer days, but also keeps the windows free from interior condensation on our many rainy days.

Andrew prides himself on the professionalism within the Arthur Monk organisation. He makes sure that there is always somebody in the office who can give an immediate quotation when a customer phones.

He has experienced the alltoo-common fault with some operators who only nominate certain people to give the quick response a potential client has a right to expect.

Minibus and midibus hire rates are proportionately high when compared with full-size coach rates and, said Andrew, it is sometimes difficult to explain to potential customers just why.

Smaller capacity vehicles do have a number of the equivalent costs — such as drivers' wages — as their larger capacity rivals. They also have a higher fuel to passenger ratio and are often as expensive to maintain often their heavier counterparts.