PROBLEM SOLVING ▪ I am an owner-driver (nine 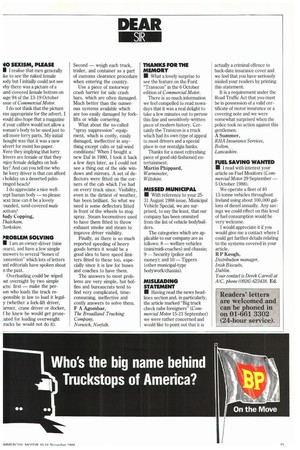 Page 19, 10th November 1988 — PROBLEM SOLVING ▪ I am an owner-driver (nine
Close
Noticed an error?
If you've noticed an error in this article please click here to report it so we can fix it.

(ears), and have a few simple mswers to several "bones of :ontention" which lots of letters ind editorials have spoken about n the past.

Overloading could be wiped rut overnight by two simple icts: first — make the per;on who loads the truck re;ponsible in law to load it legaly (whether a fork-lift driver, .armer, crane driver or docker, I he knew he would get prose:uted for loading overweight rucks he would not do it). Second — weigh each truck, trailer, and container as a part of customs clearance procedure when entering the country.

Use a piece of motorway crash barrier for side crash bars, which are often damaged. Much better than the numerous systems available which are too easily damaged by forklifts or while cornering.

What about the so-called "Spray suppression" equipment, which is costly, easily damaged, ineffective in anything except calm or tail-wind conditions? When I bought a new Daf in 1980, I took it back a few days later, as I could not see a thing out of the side windows and mirrors. A set of deflectors were fitted on the corners of the cab which I've had on every truck since. Visibility, even in the dirtiest of weather, has been brilliant. So what we need is some deflectors fitted in front of the wheels to stop spray. Steam locomotives used to have them fitted to throw exhaust smoke and steam to improve driver visibility.

Finally, as there is so much reported speeding of heavy goods lorries it would be a good idea to have speed limiters fitted to these too, espedally since it is law for buses and coaches to have them.

The answers to most problems are very simple, but boffins and bureaucrats tend to find very complicated, timeconsuming, ineffective and costly answers to solve them. F A Agomhar, The Broadland Trucking Company, Norwich, Norfolk.