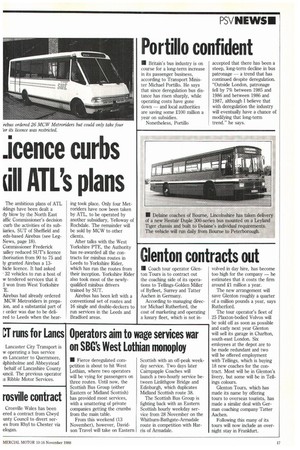 Page 15, 10th November 1988 — Operators aim to wage services war on SBG's West Lothian monoploy
Close
Noticed an error?
If you've noticed an error in this article please click here to report it so we can fix it.

• Fierce deregulated competition is about to hit West Lothian, where two operators will be vying for passengers on three routes. Until now, the Scottish Bus Group (either Eastern or Midland Scottish) has provided most services, with a smattering of private companies getting the crumbs from the main table.

From this weekend (13 November), however, Davidson Travel will take on Eastern Scottish with an off-peak weekday service. Two days later Caimpapple Coaches will launch a two-hourly service between Linlithgow Bridge and Edinburgh, which duplicates Midland Scottish route 38.

The Scottish Bus Group is fighting back with an Eastern Scottish hourly weekday service from 28 November on the Whitburri-Bathgate-Armadale route in competition with Harris of Armadale.