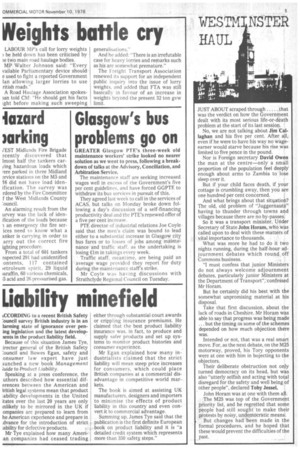 JUST ABOUT scraped through that was the verdict on how the Government dealt with its most serious life-or-death problem at the start of its last session.

No, we are not talking about Jim Callaghan and his five per cent. After all, even if he were to have his way no wageearner would starve because his rise was limited to five pence in the pound.

Nor is Foreign secretary David Owen the man at the centre—only a small proportion of the population feel deeply' enough about arms to Zambia to lose sleep over it.

But if your child faces death, if your cottage is crumbling away, then you are one hundred per cent concerned. '

And what brings about that situatiob? The old, old problem of "Juggernauts" having to thunder through towns and villages because there are no by-passes. So it was a transport minister, Under Secretary of State John Horam, who was called upon to deal with these matters of vital importance to thousands.

What was more he had to do it two nights running, during the half-hour adjournment debates which round off Commons business.

But he certainly did his best with the somewhat unpromising material at his disposal.

Take that first discussion, about the lack of roads in Cheshire. Mr Horam was able to say that progress was being made ... but the timing os some of the schemes depended on how much objection there was.

Intended or not, that was a real smart move. For, as the next debate, on the M25 motorway, proved, his Tory opponents were at one with him in bojecting to the objectors.

Their deliberate obstruction not only turned democracy on its head, but was also "utterly selfish and acting with total disregard for the safety and well being of other people", declared Toby Jessel, .

John Horam was at one with them a11.

The M25 was top of the Government priority list, and he regretted that some people had still sought to make their protests by noisy, undemocratic means.

But changes had been made in the formal procedures, and he hoped that these would prevent the difficulties of the past.