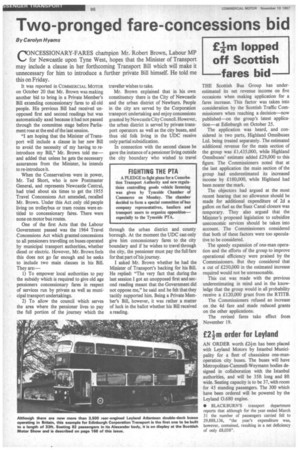 Page 98, 10th November 1967 — Two-pronged fare-concessions bid
Close
Noticed an error?
If you've noticed an error in this article please click here to report it so we can fix it.
Keywords : Social Issues

NCESSIONARY-FARES champion Mr. Robert Brown, Labour MP for Newcastle upon Tyne West, hopes that the Minister of Transport may include a clause in her forthcoming Transport Bill which will make it unnecessary for him to introduce a further private Bill himself. He told me this on Friday.

It was reported in COMMERCIAL MOTOR on October 20 that Mr. Brown was making another bid to bring in a Private Member's Bill extending concessionary fares to all old people. His previous Bill had received unopposed first and second readings but was automatically axed because it had not passed through the committee stage before Parliament rose at the end of the last session.

"I am hoping that the Minister of Transport will include a clause in her new Bill to avoid the necessity of my having to reintroduce my Bill," Mr. Brown told me— and added that unless he gets the necessary assurances from the Minister, he intends to re-introduce it.

When the Conservatives were in power, Mr. Ted Short, who is now Postmaster General, and represents Newcastle Central, had tried about six times to get the 1955 Travel Concessions Act amended, recalled Mr. Brown. Under this Act _only old people living on trolleybus or tram routes were entitled to concessionary fares. There were none on motor bus routes.

One of the first Acts that the Labour Government passed was the 1964 Travel Concessions Act which granted concessions to all pensioners travelling on buses operated by municipal transport authorities, whether diesel or electric. However, Mr. Brown feels this does not go far enough and he seeks to include two main clauses in his Bill. They are: 1) To empower local authorities to pay the subsidy which is required to give old age pensioners concessionary fares in respect of services run by private as well as municipal transport undertakings.

2) To allow the council which serves the area where the pensioner lives• to pay the full portion of the journey which the traveller wishes to take.

Mr. Brown explained that in his own constituency there is the City of Newcastle and the urban district of Newburn. People in the city are served by the Corporation transport undertaking and enjoy concessions granted by Newcastle City Council. However, the urban district is served by private transport operators as well as the city buses, and thus old folk living in the UDC receive only partial subsidization.

I asked Mr. Brown whether he had the Minister of Transport's backing for his Bill. He replied: "The very fact that during the last session I got an unopposed first and second reading meant that the Government did not oppose me," he said and he felt that they tacitly supported him. Being a Private Member's Bill, however, it was rather a matter of luck in the ballot whether his Bill received a reading.