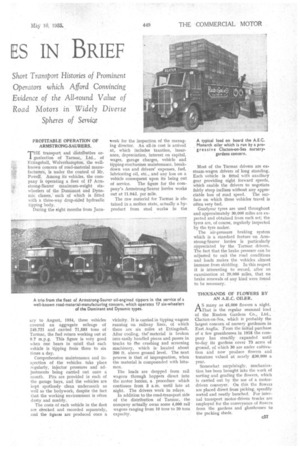 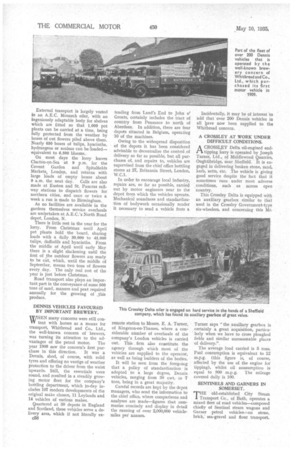 Page 115, 10th May 1935 — Spheres of Servicg
Close
Noticed an error?
If you've noticed an error in this article please click here to report it so we can fix it.

THE transport and distributive organization of Tarmac, Ltd., of Ettingshall, Wolverhampton, the wellknown concern of road-material manufacturers, is under the control of Mr, Powell. Among its vehicles, the company is operating a fleet of 17 Armstrong-Saurer maximum-weight sixwheelers of the Dominant and Dynamic classes,' each of which is fitted with a three-way drop-sided hydraulic tipping body.

During the eight months from Janu ary to August, 1934, these vehicles covered an aggregate mileage of 240,721 and carried 71,583 tons of Tarmac, the fuel return working out at 9.7 m.p.g. This figure is very good 1% hen one bears in mind that each vehicle is tipping from three to six times a day.

Comprehensive maintenance and inspection of the vehicles take place regularly, injector pressures and adjustments being carried out once a month. Pits are provided in each of the garage bays, and the vehicles are kept spotlessly clean underneath as well as the bodywork, despite the fact that the working environment is often dusty and muddy.

The costs of each vehicle in the fleet are checked and recorded separately, and the ligabes are produced once a week for the inspection of the managing director, An all-in cost is arrived at, which includes taxation, insurance, depreciation, interest on capital, wages, garage charges, vehicle and tipping-mechanism maintenance, breakdown van and drivers' expenses, fuel, lubricating oil, etc., and any loss on a vehicle consequent upon its being out of service. The figure for the company's Armstrong-Saurer lorries works out at 11.04d. per mile.

The raw material for Tarmac is obtaMed in a molten state, actually a byproduct from steel works in the vicinity. It is carried in tipping wagons running on railway lines, of which there are six miles at Ettingshall. After cooling, the` material is broken into easily handled pieces and passes in trucks to the crushing and screening machinery, which is. located about 200 ft. above ground level. The next process is that of impregnation, when the material is compounded with bitumen.

The loads are dropped from rail wagons through hoppers direct into the motor lorries, a procedure which continues from 3 a.m, until late at night. The drivers work in relays.

In addition to the road-transport side of the distribution of Tarmac, the company actually owns some 4,000 rail wagons ranging from 10 tons to 20 tons capacity.

A typical load on board the A.E.C. Monarch oiler which is run by a pro _ g re ssive Clacton-on-Sea nursery. gardens concern.

Most of the Tarmac drivers are exsteam-wagon drivers of long standing. Each vehicle is fitted with auxiliary gear providing eight forward speeds, which enable the drivers to negotiate fairly steep inclines without any appre

ciable loss of road speed. The surface on which these vehicles travel is often very bad.

Goodyear tyres are used throughout and approximately 30,000 miles are expected and obtained from each set; the tyres are, of course, regularly inspected by the tyre maker.

The air-pressure braking system which is a standard feature on Armstrong-Saurer lorries is particularly appreciated by the Tarmac drivers. The fact that the brake pressure can be adjusted to suit the road conditions and loads makes the vehicles almost immune from skidding. In this respect it is interesting to record, after an examination at 20,000 miles, that no brake renewals of any kind were found to be necessary.

THOUSANDS OF FLOWERS BY AN A.E.C. OILER.

AS many as 45,000 flowers a night. That is the regular seasonal load of the Ruaton Gardens Co., Ltd., Clacton-on-Sea, which is probably the largest concern of nursery gardeners in East Anglia. From the initial purchase of a few greenhouses in 1918 the company has steadily, expanded until to-day, its gardens cover 73 acres of ground, of which 30 are under cultivation and now produce flowers and tomatoes valued at nearly £,30,000 a year.

Somewhat surprisingly, mechanization has been brought into the work of sorting and grading the flowers, which is carried out by the use of a motordriven conveyer. On this the flowers are placed direct from picking, speedily sorted and neatly bunched. For internal transport motor-driven -trucks are employed for the conveyance of flowers from the gardens and glasshouses to the packing sheds.

External transport is largely vested in an A.E.C. Monarch oiler, with an ingeniously adaptable body for shelves which are fitted so that 1,000 pot plants can be carried at a time, being fully protected from the weather by boxes of cut flowers piled above them. Nearly 650 boxes of tulips, hyacinths, hydrangeas or azaleas can be 'loaded— equivalent to 6,500 blooms.

On most days the lorry leaves Clacton-on-Sea at 9 p.m. for the Covent Garden and Spitalfields Markets, London, and returns with large loads of empty boxes about 9 a.m. the next day. Calls are also made at Euston and St. Pancras railway stations to dispatch flowers for northern cities, and once or twice a week a run is made to Birmingham.

As no facilities are available in the gardens themselves service overhauls are undertaken at A.E.C.'s North Road depot, London, N.

There is little rest in the year for the lorry. From Christmas until April pot plants hold the board, sharing loads with a daily 30,000 to 45,000 tulips, daffodils and hyacinths. From the middle of April until early May there is a slight slackening until the first of She outdoor flowers are ready to be cut, which, until the middle of September, means two tons of flowers every day. The only real rest of the year is just before Christmas.

Road transport also plays an important part in the conveyance of some 500 tons of sand, manure and peat required annually for the growing of his produce.

tending from Land's End to John o' Groats, certainly includes the tract of country from Penzance _to north of Aberdeen. In addition, there are four depots situated in Belgium, operating 10 of the machines.

Owing to the widespread disposition of the depots it has been considered advisable to decentralize the control of delivery so far as possible, but all purchases of, and repairs to, vehicles are supervised from the chief office bottling stores at 27, Britannia Street, London, In order to encourage local industry, repairs are, so far as possible, carried out by motor engineers near to the depot from which the vehicles operate. Mechanical soundness and standardization of bodywork occasionally render it necessary to send a vehicle from a Incidentally, it may be of interest to add that over 200 Dennis vehicles in all 4ave now been supplied to the Whitbread concern.

A CROSSLEY AT WORK UNDER DIFFICULT CONDITIONS.

ACROSSLEY Delta oil-engined endtipping lorry is operated by Joseph Turner, Ltd., of Middlewood Quarries, Oughtibridge, near Sheffield. It is engaged in delivering broken stone, sand, kerb, setts, etc. The vehicle is giving good service despite the fact that it sometimes runs. under most adverse conditions, such as across open country.

This Crossley Delta is equipped with an auxiliary gearbox similar to that used in the Crossley Government-type six-wheelers, and concerning this Mr.