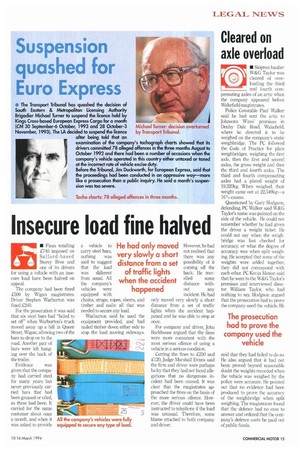 Page 17, 10th March 1994 — Suspension quashed for Euro Expres
Close
Noticed an error?
If you've noticed an error in this article please click here to report it so we can fix it.
Keywords : Tachograph, Michael, Vehicle Excise Duty, Law / Crime

The Transport Tribunal has quashed the decision of South Eastern & Metropolitan Licensing Authority Brigadier Michael Turner to suspend the licence held by Kings Cross-based European Express Cargo for Cl month ICM 30 September-6 October, 1993 and 28 October-3 November, 1993). The LA decided to suspend the licence after being told that an examination of the company's tachograph charts showed that its drivers committed 78 alleged offences in the three months August to October 1992 and there had been a number of occasions when the company's vehicle operated in this country either untaxed or taxed at the incorrect rate of vehicle excise duty.

Before the Tribunal, Jim Duckworth, for European Express, said that the proceedings had been conducted in an oppressive way—more like a prosecution than a public inquiry. He said a month's suspension was too severe.