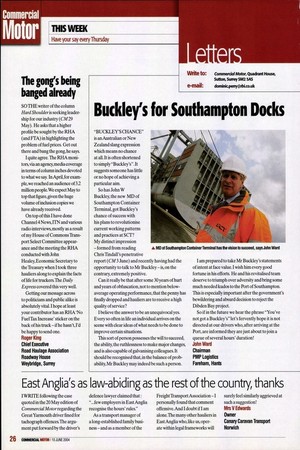 Page 22, 10th June 2004 — The gong's being
Close
Noticed an error?
If you've noticed an error in this article please click here to report it so we can fix it.

SO THE writer of the column Hard Shoulder is seeking leadership for our industry (CM 29 May). He asks that a higher profile be sought by the RHA (and FTA) in highlighting the problem of fuel prices. Get out there and bang the gong, he says.

I quite agree. The RHA mothtors, via an agency,media coverage in terms of column inches devoted to what we say. In April,for example, we reached an audience of 32 million people. We expect May to top that figure,given the huge volume of inclusion copies we have already received. On top of this I have done Channel 4 News, ITN and various radio interviews, mostly as a result of my House of Commons Transport Select Committee appearance and the meeting the RHA conducted with John

Healey, Economic Secretary to the Treasury when I took three hauliers along to explain the facts of life for truckers.The Daily Express covered this very well.

Getting our message across to politicians and public alike is absolutely vital. I hope at least your contributor has an RHA 'No FuelTax Increase' sticker on the back of his truck —if he hasn't, I'd be happy to send one. Roger King Chief Executive Road Haulage Association Roadway House Weybridge, Surrey