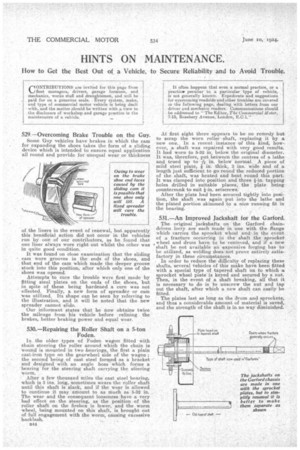 Page 30, 10th June 1924 — HINTS ON MAINTENANCE.
Close
Noticed an error?
If you've noticed an error in this article please click here to report it so we can fix it.

now to Get the Best Out of a Vehicle, to Secure Reliability and to Avoid Trouble.

529.—Overcoming Brake Trouble on the Guy.

Some Guy 'vehicles have brakes in which the cam for expanding the shoes takes the form of a sliding device which is intended to ensure equal application all round and provide for unequal wear or thickness of the liners in the event of renewal, but apparently this beneficial action did not occur in the vehicles run by one of our contributors, as he found that one liner always wore right out whilst the other was in quite good condition.

It was found on close examination that the sliding cam wore grooves in the ends of the shoes, and that end of the cam which made the deeper groove stuck into this position, after which only one of the shoes was opened. Attempts to cure the irouble were first made by fitting steel plates on the ends of the shoes, but in spite of these being hardened a cure was not effected. Finally, a new form of spreader or cam was utilized. Its shape can be seen by referring to the illustration, and it will be noted that the new spreader cannot slide.

Our informant states that he now obtains twice the mileage from his vehicle before relining the brakes, better braking power and equal wear.

In the older types of Foden wagon fitted with chain steering the roller around which the chain is "wound is mounted in two *bearings, the first a plain east-iron type on the gearwheel side of the wagon ; the second being of cast steel formed as a bracket and designed with an angle boss which forms a bearing for the steering shaft carrying the steering

After a few thousand miles the cast steel bearing, which is 3 ins, long, sometimes wears the roller shaft until this shaft is slack, and if the wear is allowed to continue it may amount to as much as 5-32 in. The wear and the consequent looseness have a very had effect on• the steering, as the position of the roller shaft on the firebox is lower, and the worm wheel, being mounted on this shaft, is brought out of full engagement with the worm, causing excessive backlash.

At first sight there appears to be no remedy but to scrap the worn roller -shaft, replacing it by a new one. In a recent .instance 'of this kind, however, a shaft was repaired with very good results. It had worn to 5-22 in, below the original diameter. It was, therefore, put between the centres of a lathe and trued up to Ti in. below normal. A piece of

mild steel plate, in. thick, 3 ins, wide and of a length just sufficient to go round the reduced portion of the shaft, was heated and bent round this part. It was clamped into position and three i-in, tapping holes drilled in' suitable places, the plate being countersunk to suit i-in. setscrews.

After the plate had been secured tightly into position, the shaft was again put into the lathe and the plated portion skimmed to a nice running fit in the bearing.

531.—An Improved Jackshaft for the Garford.

The original jackshafts on the Garford

which carries the sprooket wheel and in the event of a fracture occurring in the shaft the sprocketwheel and drum have to he removed, and if a new shaft be not available an expensive forging has to be utilized, as welding does not prove entirely satisfactory in these eircun3stances.

In order to reduce the difficulty of replacing these shafts, several vehicles of this make have been fitted with a special type of tapered shaft on to which a sprocket wheel plate is keyed and secured by a nut. Then, in the event of a shaft breaking, all that it is necessary to do is to unscrew the nut arid tap out the shaft, after which a new shaft can easily be

fitted. • • The plates last as long as the drum and sprockets, and thus a considerable amount of material is saved, and the strength of the shaft is in no way diminished.