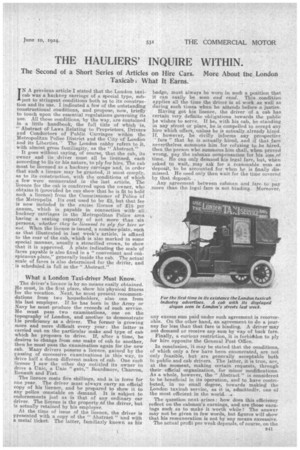 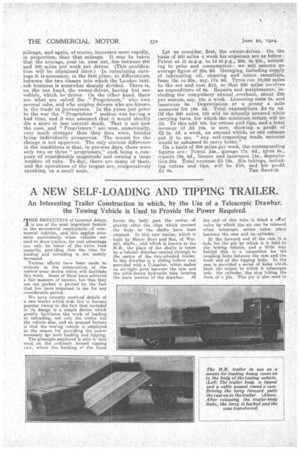 Page 27, 10th June 1924 — THE HAULIERS' INQUIRE WITHIN.
Close
Noticed an error?
If you've noticed an error in this article please click here to report it so we can fix it.
Keywords : Carriages, Taxicab, Hackney Carriage, Driver's License, Taxicabs Of The United Kingdom, Taxicabs By Country

The Second of a Short Series of Articles on Hire Cars. More About the London Taxicab What It Earns.

IN A previous article I stated that the London taxicab was a hackney carriage of a special type, subject to stringent conditions both as to its construction and its use. I indicated a feW of the outstanding constructional conditions, and propose, now, briefly to touch upon the essential regulations governing its use. All these conditions, by the way, are contained in a little handbook, the full title of which is, " Abstract of Laws Relating to Proprietors, Driversand Conductors of Public Carriages within the Metropolitan Police District and the City of London and its Liberties." The London cabby refers to it, with almost gross familiarity, as the " Abstract."

It goes without saying, of course, that the cab, its owner and its driver must all be licensed, each according to its or his nature, to ply for hire. The cab must be licensed as a hackney carriage and, in order that such a licence may be granted, it must comply, as to its construction, with the conditions of which a few were enumerated in the last article. The licence for the cab is conferred upon the owner, who obtains it (provided he can show that he is fit to hold such a licence) from the Commissioner of Police of the Metropolis. Its cost used to be £2, but that fee is now included in the excise licence of £15 per annum, -which is payable in connection with aui hackney carriages in the Metropolitan Police area having a seating capacity of not more than six persons, whether they be licensed to ply for hire or not. When the licence is issued, a number-plate, such as that illustrated in last week's article is affixed to the rear of the cab, which is also marked in some special manner, usually a stencilled crown, to show that it is approved. A plate indicating the scale of fares payable is also fixed in a "convenient and conspicuous place," generally inside the cab. The actual scale of fares is also determined for the drifir, and is scheduled in full in the-" Abstract."

What a London Taxi-driver Must Know.

The driver's licence is by no means easily obtained. He must, in the first place, show his physical fitness for the vocation. Next, he must present recommendations from two honseholilers, also one from his last employer. If he has been in the Army or Navy he must produce the record's of such service. He must pass two examinations, one on the topography of London, and another to demonstrate his proficiency as a driver. The former is growing more and more difficult every year : the latter is carried out on the particular make and type of cab Which he proposes to drive. If, after a time, he desires to change from one make of cab to another, then he must pass the examination again for the new cab. Many drivers possess a licence, gained by the passing of successive examinations in this way, to drive half a dozen different makes of cab. One such licence I saw the other day entitled its owner to drive a Unic, a Unic "gate," Beardmore, Charron, Renault and Fiat.

The licence costs five shillings, and is in force for one year. The driver must always carry an official copy of his licence, and be prepared to show it to any police constable on demand. It is suhject to endorsements just as is that of any ordinary car driver. The licence is the property of the driver, but is actually retained by his employer. At the time of issue of the licence, the driver is presented with a copy of the " Abstract" and with a metal ticket. The latter, familiarly known as his

badge, must always be worn in such a position that it can easily be seen and read. This condition applies all the time the driver is at work as well as during such times when he attends _before a justice. Having got his licence, the driver of a cab has certain very definite obligations towards the public he wishes to serve. If he, with his cab, be standing in any street or place, he is compelled to accept any hire which offers, unless he is actually already hired. if, however, he civilly informs any prospective fare " that he is actually, hired, and if that fare nevertheless summons him for refusing to be hired, then the person wheasumnions hiui shall, when proved wrong, pay the cabman compensation for his loss ,of time. He can only demand his legal fare, but, when asked to wait, may ask for a reasonable sum as deposit, to be accounted for when hefinally dismissed. He need only then wait for the time covered by that deposit.

Any agreement between cabman and fare. to pay mare than the legal fare is not bdnding. Moreover.

any excess sum paid under such agreement is recoverable. On the other hand, an agreement to do a journey for less than that fare is binding. A driver may not demand or receive any sum by way of back fare.

Finally, a curious restriction, it is forbidden to ply for hire opposite the General Post Office.

In conclusion, it may be stated that the conditions, of which only a few have been enumerated, are not only feasible, but are generally acceptable both to public and cab drivers. The latter, it is true, are, at the moment, making certain requests, through their official organization, for minor modifications. As a whole, however, the " Abstract" is considered to be beneficial in its operation, and to have contributed, in no small degree, towards making the London taxicab service, as it is, admittedly, one of the most efficient in the world. .

The question next arises : how does this efficiency reflect on the cabman's earnings, and are those earnings such as to make it worth while? The answer may not be given in few words, but figures will show that his remuneration is not by any means excessive.

The actual profit per week depends, of course, on the

mileage, and again, of course increases more rapidly, in proportion, than that mileage. It may be taken that the average, year in, year out, lies between =200 and 300 miles per week per driver. (This qualification will be explained later.) In calculating earnings it is-necessary, in the first place, to differentiate between the two classes into which the London taxicab business i somewhat sharply divided. There is, on the one hand, the owner-driver, having but one vehicle, which he drives. On the other hand, there are what are called the " Proprietors," who own several cabs, and who employ drivers who are known in the trade as journeymen. ' In the years just pigor to the war the "Proprietors" section was having a bad time, and it was assumed that it would shortly die a more or less natural death. That Es not now the case, and "Proprietors " are now, numerically, very much stronger than they then were, besides being individually prosperous. The reason for the change is not apparent. The only obvious difference in the conditions is that, in pre-war days, there were only two or three " proprietors," each being a company of considerable magnitude and owning a large number of cabs. To-day, there are many of them, and the operations of the largest are, comparatively speaking, on a small scale. Let us consider, first, the owner-driver. On the basis of 200 miles a week his expenses are as follow: Petrol at 13 m.p.g. to 14 M.p.g., 20s. to 24s., according to price and consumption : we will assume an average figure of 22s. 6d. Garaging, including supply of lubricating oil, cleaning and minor essentials, from 35s. to 20s., say, 17s. 6d. Tyres run 10,000 miles to the set and cost 215, so that 200 miles involves an expenditure of 6s. Repairs and maintenance, including the compulsory annual overhaul, about 225 per annum, say, 10s. a week. Licensing casts fis. and insurance 8s. Depreciation at a penny a mile accounts for 16s. Sd. Total expenditure £4 6s. Bd. Of the 200 miles, 120 will be actually covered while carrying fares for which the minimum return will be 26. . To this add 10s. for extras and tips, and a total revenue 'of 26 10s. is seen, showing a profit of 22 3s. 4d. a week, an amount which; as one cabman put it to me, " any self-respecting trade unionist would be ashamed to carry home."