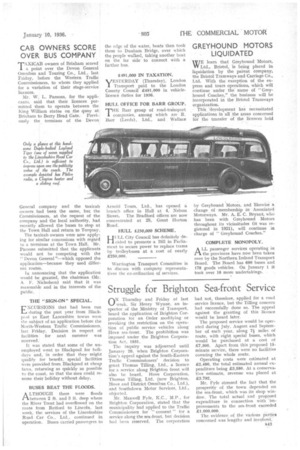 ON Thursday and Friday of last week, Sir Henry Wynne, an inspector of the Ministry of Transport, heard the application of Brighton Corporation for an Order modifying or revoking the restriction on the operation of public service vehicles along Hove sea-front. The prohibition was imposed under the Brighton Corporation Act, 1931.

Mr. Maxwell Fyfe, KC., M.P., for Brighton Corporation, stated that the municipality had applied to the Traffic Commissioners for "consent " for a service along the sea-front, but decision had been reserved. The corporation

had not, therefore, applied for a road service licence, but the Tilling concern had successfully done so. The appeal against the granting of this licence would be heard later.

The proposed service would be operated during July, August and September of each year, along 7i miles of route, with eight special buses, which would be purchased at a cost of £7,300. Apart from this proposed 15minute service, there were no facilities covering the whole route.

Operating costs were estimated at £2,480, the total estimated annual expenditure being £3,580. At a conservative estimate, revenue was placed at £3,792, Mr. Fyfe stressed the fact that the prosperity of the town depended on the sea-front, which was its shop window. The total actual and proposed expenditure in connection with improvements to the sea-front exceeded £1,000,000.

The evidence of the various parties concerned was lengthy and involved. 1343