A Grant of 10 Artics Reduced to Six 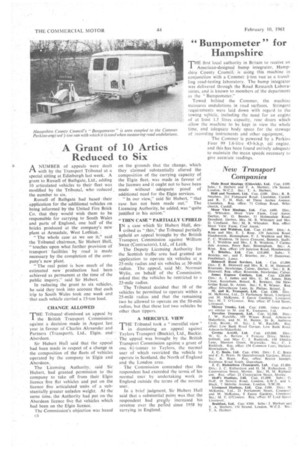 Page 44, 10th February 1961 — A Grant of 10 Artics Reduced to Six
Close
Noticed an error?
If you've noticed an error in this article please click here to report it so we can fix it.
Keywords : Articulated Vehicle, Vehicles, British Transport Commission, Public Inquiry

aA NUMBER of appeals Were dealt

with by the Transport Tribunal at a special sitting at Edinburgh last week. A grant to Russell of Bathgate, Ltd., adding 10 articulated vehicles to their fleet was modified by the Tribunal, who reduced , the number to six. . .

Russell of Bathgate had based their application for the additional vehicles on being informed bythe United Fire Brick Co. that they would wish them to be responsible for carrying to South WaleS and parts of England, one half of the bricks. produced at the company's new plant at Armadale, West Lothian.: "The whole caseas we see it,' said the Tribunal chairman,: Sir Hubert Hull; "touches upon what further provision of transport facilities by road is made necessary by the completion of the company's new plant.

"The real point is how much of the estimated new production had been achieved as permanent at the time of the public inquiry," said Sir Hubert.

In reducing the grant to six vehicles, he said they took into account that each trip to South Wales took one week and that each vehicle carried a 15-ton load.

THE Tribunal dismissed an appeal by

the British Transport Commission against a decision made in August last year in favour of Charles Alexander and Partners (Transport), Ltd., Elgin, and' Aberdeen.

Sir Hubert Ha said that the appeal had been made in respect of a change in the composition of the fleets of vehicles operated by the company in •Elgin and Aberdeen.

The Commission's -objection was based on the grounds that the 'change, which they claimed substantially altered the compositiOn of the carrying capacity of the Elgin fleet, was made in favour -of the licensee and it ought not to have been made -without adequate proof of additional need for the Elgin services.

"In our view," said Sir Hubert, "that case .has not been made out." The Licensing' Authority, he added, was "quite justified in his action."

—rum CASE" PARTIALLY UPHELD IN a case which Sir Hubert Hull, des7 I cribed as "thin," the Tribunal partially upheld an appeal brought by the British Transport Commission against William Swan (Contractors), Ltd., of Leith. The Deputy Licensing Authority for the Scottish traffic area had granted an application to operate six vehicles at a 25-mile radius and six vehicles at 50-mile radius. The appeal, said Mr. Norman Wylie, on behalf of the Commission, asked that the vehicles be restricted to a 25-mile radius.

THE Tribunal took a "merciful view" 1 in dismissing an appeal against Taylors Transport (Bache), Ltd., Buckie. The appeal was brought by the British Transport Commission against a grant of one .6i-tonner to Taylors, the normal user of which restricted the vehicle to operate in Scotland, the North of England and the London area.

. The Commission contended that the respondent had exceeded the term's of his normal user by undertaking work in England outside the terms of the normal user.

In a brief judgment. Sir Hubert Hull said that a substantial point was that the respondent had greitly increased his revenue over the period since 1958 by carrying in England.