A.E.C.—Thornycroft No Change for Present 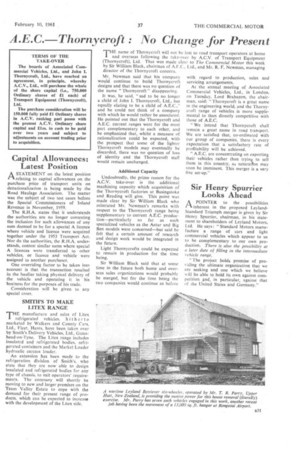 Page 37, 10th February 1961 — A.E.C.—Thornycroft No Change for Present
Close
Noticed an error?
If you've noticed an error in this article please click here to report it so we can fix it.
Keywords : Associated Equipment Company, Thornycroft, Thornycroft Family, Off-road Vehicles

THE name of Thornycroft will not he lost to road transport operators at home and overseas following the take-over by A.C.V. of Transport Equipment (Thorn ycroft), Ltd. That was made clear to The Commercial Motor this week by Sir William Black, chairman of A.E.C.. Ltd., and Mr. R. F. Newman, managing director of the Thornycroft concern.

Mr. Newman said that his company would continue to build Thornycroft designs and that there was no question of the name " Thornycroft " disappearing.

It was. he said, "sad to be no longer a child of John I. Thornycroft, Ltd., but equally elating to be a child of A.E.C.," and he could not think of a company with which he would rather be associated. He pointed out that the Thornycroft and A.E.C. current ranges were for the most part complementary to each other, and he emphasized that, whilst a measure of rationalization could be expected, with the prospect that some of the tighter Thornycroft models may eventually be discarded, there was no question of loss of identity and the Thornycroft staff would remain unchanged.

Additional Capacity Undoubtedly, the prime reason for the A.C.V. take-over is the additional machining capacity which acquisition of the Thornycroft factories at Basingstoke and Reading will give. This point was made clear by Sir William Black who reiterated Mr. Newman's remarks with respect to the Thornycroft range being supplementary to current A.E.C. production—particularly so far as such specialized vehicles as the Antar and Big Ben models were concerned—but said he felt that a certain amount of research and design work would be integrated in the future_ Light Thornycrofts could be expected to remain in production for the time being.

Sir William Black said that at some time in the future both home and overseas sales organizations would probably be merged, but for the time being the two companies would continue as before with regard to production, sales and servicing arrangements.

At the annual meeting of Associated Commercial Vehicles, Ltd., in London, on Tuesday, Lord Brabazon, the chairman, said: "Thornycroft is a great name in the engineering world, and the Thornycroft range of vehicles is more supplemental to than directly competitive with those of A.E.C.

"We intend that Thornycroft shall remain a great name in road transport. We are satisfied that, co-ordinated with our group of companies, there is every expectation that a satisfactory rate of profitability will be achieved.

"A.E.C. are concentrating on exporting their vehicles rather than trying to sell them in this country, as saturatfon may soon be imminent. This merger is a very fine set-up."