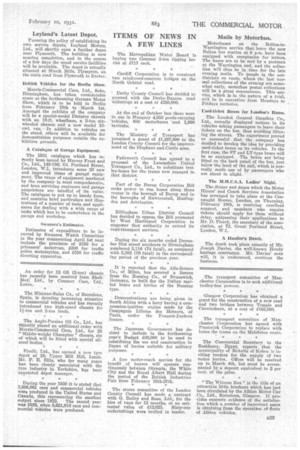 Page 85, 10th February 1931 — ITEMS OF NEWS IN A FEW LINES
Close
Noticed an error?
If you've noticed an error in this article please click here to report it so we can fix it.
Keywords : Transport, Land Transport, Leyland Motors, Albion Motors, Commer, Tram, Buses, Business / Finance

The Hispano-Suiza Co., of Barcelona, Spain, is devoting increasi ws attention to commercial vehicles and has recently introduced two high-speed chassis for 1s-ton and 2-ton loads.

The Anglo-Persian Oil Co., Ltd., has recently placed an additional order with Morris-Cominercial Cars, Ltd., for 25 "Middle-weight Champion" chassis, six of which will be fitted with special allsteel bodies.

Pirelli, Ltd., has opened a new tyre depot at 19, Upper Mill Hill, Leeds. Mr. F. E. Ellis, who for many years has been closely associated with the tyre industry in Yorkshire, has been appointed depot manager.

Cardiff Corporation is to construct two reinforced-concrete bridges on the North Orbital road.

' Derby County Council has decided to proceed with the Derby-Buxton road widenings at a cost of £250,000.

At the end of October last there were in use in Hungary 4,553 goods-carrying vehicles, 680 motorbuses 'and 1,890 taxicabs.

The Ministry of Transport has promised a grant of £1,387,500 to the London County Council for the improvement of the Elephant and Castle area.

Farnworth Council has agreed to a proposal of the Lancashire United Transport Co., Ltd., to substitute trolley-buses for the trams now engaged in that district.

Part of the Beam Corporation Bill seeks power to run buses along three routes in the borough of Bacup and in the boroughs of Rawtenstall, Efasling,den and Accrington.

Dillingham Urban District Council has decided to oppose the Bill promoted by West Hartlepool Corporation to empower that authority to extend its road-transport services.

During the six months ended December 31st street accidents in Birmingham numbered 5,116 (74 fatal), as compared with 5,302 (76 fatal) in the corresponding period of the previous year.

It is reported that the Alfa-Romeo Co., of Milan, has secured a licence from the Bussing Co., of Brunswick, Germany, to built for the Italian market buses and lorries of the Bussing type. * Demonstrations are being given in South Africa with a lorry having a compression-ignition engine made by the Compagnie Lilloise des Moteurs, of Paris, under the Peugeot-Junkers licence.

The Japanese Government has decided to include in the forthcoming year's Budget £36,000 to be used in subsidizing the use and construction in Japan of lorries suitable for military Purposes.

A free motor-coach service for the benefit of buyers will operate continuously between Olympia, the White City and the Royal Albert Hall during the period of the British Industries Fair from February 16th-27th.

The stores committee of the London County Council has made a contract -with G. Bailey and Sons, Ltd., for the hire of vans for 12 months, at an estimated value of 112,625. Sixty-one undertakings were invited to tender.

The transport committee of Manchester Corporation is to seek additional trolley-bus powers.

Glasgow Corporation has obtained a grant for the construction of a new road and two bridges between Temple and Canniesburn, at a cost of £163,500.

The transport committee of Manchester Corporation has agreed with Prestwich Corporation to replace with buses the trams on the Middleton route.

The Commercial Secretary to the Residency, Egypt, reports that the municipality of Mehalla el Kobra is inviting tenders for the Slipply of two motor lorries. Offers will be received up to March 4th, but must be accompanied by a deposit equivalent to 2 per cent, of the price.

"The Witness Box" is the title of an attractive little brochure which has just been circulated by the Albion Motor Car Co., Ltd., Scotstorin, Glasgow. It provides concrete evidence of the satisfaction which &number of important users is obtaining from the operation of' fleets of Albion vehicles.