Some New Ideas in 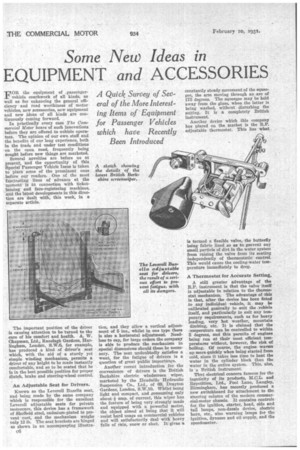 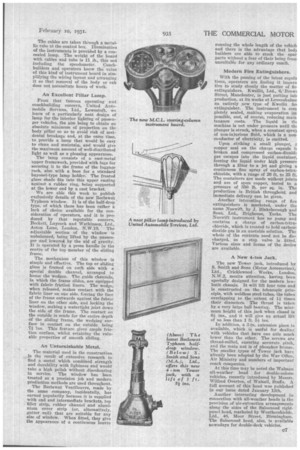 'DOR the equipment of .passenger12 vehicle coachwork of all kinds, as well as for enhancing the general efficiency and road worthiness of motor vehicles, new accessories, new equipment and new ideas of all kinds are continuously coming forward.

In practically every case The Commercial Motor hears of such innovations before they are offered to vehicle operators. The opinion of our own staff and the benefits of our long experience, both in the trade and under test conditions on the open road, frequently being sought before new things are marketed.

Several novelties are before us at present, and the opportunity of this Special Passenger Vehicle Issue is taken to place sane of the prominent ones before our readers. One of the most fascinating lines of advance at the moment is in connection with ticketissuing and fare-registering machines, and the latest developments in this direction are dealt with, this week, in a separate article.

The important position of the driver is causing attention to be turned to the care of his comfort and health. A. W. Chapman, Ltd., Ranelagh Gardens, Hurlingham, London, S.W.6, for example, has produced a kind of driver's seat which, with the aid of a sturdy yet simple winding mechanism, permits a driver of any height to be made instantly comfortable, and so to be seated that he is in the best possible position for proper clutch, brake and steering-wheel control.

An Adjustable Seat for Drivers.

Known as the Leveroll Busella seat, and being made by the same company which is responsible for the excellent Leveroll adjustable seats for private motorcars, this device has a framework of Sheffield steel, cadmium-plated to prevent rust, and the mechanism weighs only 12 lb. The seat brackets are hinged as shown in an accompanying illustra c6 tion, and they allow a vertical adjustment of 5 ins., whilst in one type there is also a horizontal adjustment. Needless to say, for large orders the company is able to produce the mechanism in special dimensions should these be necessary. The seat undoubtedly satisfies a want, for the fatigue of drivers is a question of great public importanee.

Another recent introduction for the convenience of drivers is the British Berkshire electric windscreen wiper, marketed by the Houdaille Hydraulic Suspension Co., Ltd., of 69, Drayton Gardens, London, S.W.10. Whilst being light and compact, and consuming only about amp. of current, this wiper has the feature of being very strongly made and equipped with a powerful motor, the object aimed at being that it will resist hard usage on commercial vehicles and will satisfactorily deal with heavy falls of rain, snow or sleet. It gives a constantly steady movement of the squeegee, the arm moving through an arc of 175 degrees. The squeegee may be held away from the glass, when the latter is being washed, without disturbing the setting. It is a completely British instrument

Another device which this company has placed on the market is the R.P. adjustable thermostat. This has what is termed a flexible valve, the butterfly being fabric lined so as to prevent any small particle of dirt in the water system from raising the valve from its seating independently of thermostatic control. This would cause the cooling-water temperature immediately to drop.

A Thermostat for Accurate Setting,

A still greater advantage of the R.P. instrument is that the valve itself is adjustable in relation to the thermostat mechanism. The advantage of this is that, after the device has been fitted to any individual vehicle, it may be calibrated generally to suit the vehicle itself, and particularly to suit any temporary requirements, such as for heavy loading, very hot 'weather, mountain iimbing, etc. It is claimed that the :emperatnre can be controlled to within 3 degrees, and this permits of engines being run at their most efficient temperatures without, however, the risk of boiling. Of course, the engine warms up more quickly when being started from cold, since it takes less time to heat the water in the cylinder block than the water in the entire system. This, also, is a British instrument.

That electrical concern famous for the ingeduity of its products, M.O.D. and Repetition, Ltd., Pool Lane, Langley, Birmingham, has recently produced a new switchboard for attachment to the steering column of the modern commercial-motor chassis. It contains controls for the ignition, starter, head, side and tail lamps, non-dazzle device, electric horn, etc., also warning lamps for the ignition, dynamo and oil supply, and the speedometer. The cables are taken through a metal-, lie tube V) the control box. Illumination of the instruments is provided by a concealed lamp. The weight of the board with cables and tube is 11 lb., this not including the speedometer. Coachbuilders and operators know the value of this kind of instrument board in simplifying the wiring layout and arranging it so that removal of the body or cab does not necessitate hours of work.

From . that famous operating and coachbuilclima concern, United Automobile Services, Ltd., Lowestoft, we learn of a particularly neat design of lamp for the interior lighting of passenger vehicles, the aim being to obtain all absolute minimum of projection on the body pillar so as to avoid risk of accidental breakage and, at the same time, to provide a lamp that would be easy to clean and maintain, and would give the maximum amount of well-distributed light as well as a pleasing appearance.

The lamp consists of a cast-metal upper framework, provided with lugs for securing it to the frame of the luggage rack, also with a boss for a standard bayonet-type lamp holder. The frosted glass shade fits into this upper casting against a rubber ring, being supported at the lower end by a cast bracket.

We are able this week to publish exclusively details of the new Beclawat Typhoon window. It is of the half-drop type, of which there has been rather a lack of choice available for the consideration of operators, and it is produced by that reputable concern, Beckett, Laycock and Watkinson, Ltd., Acton Lane, London, N.W.10. The adjustable section of the window is unbalanced, being lifted by the passenger and lowered by the aid of gravity. It is operated by a press handle in the centre of the top member of the sliding frame.

The mechanism of this window is simple and effective. The top or sliding glass is framed on each side with a special double channel, arranged to house the wedges. The guide channels. in which the frame slides, are equipped with fabric friction liners. The wedge, when released, makes contact with the fabric liner on oue side, forcing the face of the frame outwards against the fabric liner on the other side, and locking the window, making a watertight joint down the side of the frame. The contact on the outside is made for the entire depth of the sliding frame, the wedging surface in contact on the outside being 71 ins. This feature gives ample friction surface, whilst retaining the valuable properties of smooth sliding.

The material used in the construction is the result of extensive, research to find a 'metal which combined strength and durability with lightness and would take a high polish without discolouring in service. The window has been treated as a precision job and modern prodiaction methods are used throughout.

The Beclawat Ventilouvre, made by the , same company, incidentally, has earned popularity because it is supplied with end and intermediate brackets, top fillet strip, rubber channel and aluminium cover strip (or, alternatively, gutter rail) that are suitable for any size of window. When fitted, they give the appearance of a continuous louvre running the whole length of the which and there is the advantage that body builders are able to stock the spar parts without a fear of their being fouu, unsuitable for any ordinary coach.

With the passing of the latest regain_ tions, operators are finding it imaera tive to study closely the matter of fir, extinguishers. Kwellit, Ltd., 6, Browi Street, Manchester, is just putting inn production, at its works at Levenshulme an entirely new type of Kwellit fin extinguisher. The instrument is corn pletely sealed, making evaporation im possible, and, of course, reducing main tenance costs. The liquid in tin machine is not under pressure until tht plunger is struck, when a constant spray of non-injurious fluid, which is a nonconductor of electricity, is emitted.

Upon striking a small plunger, a copper seal on the charge capsule is broken and compressed carbon-dioxide gas escapes into the liquid container, forcing the liquid under high pressure through a filter to a jet and giving a continuous fine spray of carbon-tetrachloride, with a range of 20 ft. to 25 ft. The containers are made without joints and are of spun copper, tested to a pressure of 350 lb. per sq. in. The production is British throughout and immediate delivery can be given.

Another interesting range of fire extinguishers is marketed, under the name Nuswift, by J. Blakeborough and Sons, Ltd., Brighouse, Yorks. The Nuswift instrument has no pump and contains a charge of carbon-tetrachloride, which is treated to hold carbon dioxide gas in an unstable solution. The whole of the contents need not be discharged, as a stop valve is fitted. Various sizes and forms of the device are available.

The new Tower jack, introduced by S. Smith and Sons (Motor Accessories), Ltd. Cricklewood . Works, London. N.W.2, merits attention, having been specially designed for the modern lowbuilt chassis. It will lift four tons and is constructed on the, telescopic principle, with weldless steel. tubes, the tubes overlapping to the extent of 1i times their diameters. The thrust is taken by a very large ball bearing. The minimum height of this jack when closed is 6/ ins., and it will give an actual lift of no less than 1 ft. 54, ins.

In addition. a 3-in, extension piece is available, which is useful for dealing with vehicles that have one axle much lower than the other. The screws are thread-milled, ensuring accurate pitch, and the main nut is of phosphor bronze. The smaller types of Tower jack have already been adopted by the War Office, Air Ministry and numbers of important coach companies.

At this time may be noted the Walman all-weather bead for double-saloon vehicles, recently introduced by Messrs. Wilfred Overton, of Walsall, Staffs. A fall account of this head was published in our issue dated January 13th.

Another interesting development in connection with all-weather heads is the provision of air-extraction arrangements along the sides of the Saloonood rigidpanel head, marketed by Weathershields, Ltd., 48, Moor Street, Birmingham. The Saloonood head, also, is available nowadays for double-deck vehicles.