HOW MUCH IT COSTS TO RUN Passenger Vehicles 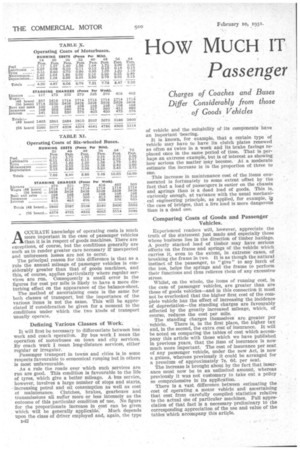 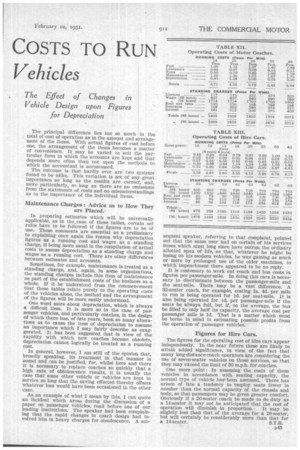 Page 112, 10th February 1931 — HOW MUCH IT COSTS TO RUN Passenger Vehicles
Close
Noticed an error?
If you've noticed an error in this article please click here to report it so we can fix it.

ACCURATE knowledge of operating costs is much more important in the case of passenger vehicles than it is in respect of goods machines. There' are exceptions, of course, but the conditions generally are such as to render greater care necessary if unexpected and unforeseen losses are not to occur.

The principal reason for this difference is that as a rule the annual mileage of passenger vehicles is considerably greater than that of goods machines, and this, of course, applies particularly where regular services are run. Consequently a small error in the figures for cost per mile is likely to have a more disturbing effect on the appearance of the balance-sheet.

The method of ascertaining costs is the same for both classes of transport, but the importance of the various items is not the same. This will be appreciated if consideration be given for a moment to the conditions under which the two kinds of transport usually operate.

It will first be necessary to differentiate between bus work and coach operation. By bus work I mean the operation of motorbuses on town and city services. By coach work I mean long-distance services, either regular or irregular.

Passenger transport in towns and cities is,in some respects favourable to economical running but in others is most unfavourable.

As a rule the roads over which such services are run are good. This condition is favourable to the life of tyres, which give a better mileage. A bus service, however, involves a large number of stops and starts, -increasing petrol and oil consumption as well as cost ot maintenance. Clutches, brakes, gearboxes and transmissions all suffer more or less intensely as the outcome of this particular condition of use. No figure for the proportionate increase in cost can be given which will be generally applicable. Much depends upon the class of driver employed and, again, the type

D4.2 of vehicle and the suitability of its components have an important bearing.

It is known, for example, that a certain type of vehicle may have to have its clutch plates renewed as often as twice in a week and its brake facings replaced once in the same period of time. That is perhaps an extreme example, but is of interest as showing how serious the matter may become. At a moderate estimate the, increase is in the proportion of three to one.

This increase in maintenance cost of the items enumerated is fortunately to some extent offset by the fact that a load of passengers is easier on the chassis and springs than is a dead load of goods. This is, curiously enough, at variance with the usual mechanical engineering principle, as applied, for example, in the case of bridges, that a live load is more dangerous than is a dead one.

Experienced readers will, however, appreciate the truth of the statement just made and especially those whose business lies in the direction of timber haulage. A poorly stacked load of timber may have serious effects on the frame and springs of the vehicle which carries it, even to the extent, in extreme cases, of breaking the frame in two. It is as though the natural instinct of the passenger, to " give " to any lurch of the bus, helps the springs and the frame to perform their functions and thus relieves them of any excessive, stress.

Whilst, on the whole, the items of running cost, in the case of passenger vehicles, are greater than are those of goods vehicles-and in this connection it must not be overlooked that the higher first cost of the complete vehicle has the effect of increasing the incidence of depreciation-the standing charges are favourably affected by the greatly increased mileage, which, of course, reduces the cost per mile.

The standing charges themselves are greater per vehicle. There is, in the first place, the higher tax and, in the second, the extra cost of insurance. It will be noted on comparing the tables of cost which accompany this article with those which we have published in previous years, that the item of insurance is now much more important. The cost of insurance per seat of any passenger vehicle, under the new Act, is now a guinea, whereas previously it could be arranged for a premium of approximately 7s. 6d. per seat.

The increase is brought about by the fact that insurance must now be to an unlimited amount, whereas previously it was not customary to take out a policy so comprehensive in' its application.

There is a vast difference between estimating the cost of operating a motor vehicle and ascertaining that cost from carefully compiled statistics relative to the actual use of particular machines. Full appreciation of that fact is a necessary preliminary to the corresponding appreciation of the use and value of the tables which accompany this article.

The principal difference lies not so much in the. totalof cost of operation as in the amount and arrangement of the items. With actual figures of cost before one, the arrangement of the items becomes a matter of convenience. It may be varied to suit the particular form in which the accounts are kept and that depends more often than not upon the methods to which the accountant is accustomed.

The outcome is that hardly ever are two systems found to be alike. This variation is not of any great importance so long as the results are correct, and, more particularly, so long as there are no omissions from the statements of costs and no misunderstandings as to the importance of the individual items.

Maintenance Charges : Advice as to How They are Placed.

In preparing estimates which will be universally applicable, as in the case of these tables, certain set rules have to be followed if the figures are to be of use. These comments are essential as a preliminary to explaining once again the reason why depreciation figures as a running cost and wages as a standing charge, it being more usual in the compilation of actual costs to assess depreciation as a standing charge and wages as a running cost. There are other differences between estimates and accounts.

Sometimes, for example, maintenance is treated as a standing charge, and, again, in some organizations, the standing charges include this item of maintenance as part of the establishment costs of the business as a whole. If it be -understood from the commencement that these tables relate purely to the operating costs of the vehicles alone, the method and the arrangement of the figures will be more easily understood.

One word more about depreciation, which is always a difficult item. It is more so in the ease of passenger vehicles, and particularly coaches, in the design of which there has, of late years, been so many alterations as to cause the item of depreciation to assume an importance which I may fairly describe as exaggerated. It has been suggested that in view of the rapidity with which new coaches become obsolete, depreciation cannot logically be treated as a running cost.

In general, however, I am still of the opinion that, broadly speaking, its treatment in that manner is sound and can be justified, for, whilst here and there it is necessary to replace coaches so quickly that a high rate of obsolescence results, it is usually the case that some other vehicle or vehicles are kept in service so long that the saving effected thereby offsets whatever 'loss would have been occasioned in the other case.

As an example of what I mean by this, I can quote an incident which arose during the discussion of a paper on passenger vehicles, read before one of our leading institutions. The speaker had been complaining that the rapid changes in coach design had involved him in heavy charges for obsolescence. A sub sequent speaker, referring to that complaint, pointed out that the same user had on certain of his services buses which must long since have outrun the ordinary allotted span of life, so that, whatever he might be losing on his modern vehicles, he was gaining as much or more by prolonged use of the older ,machines, to which impeachment there appeared to be no reply.

It is customary to work out coach and bus costs in figures per passenger-mile. In doing this care is necessary to discriminate between the passenger-mile and the seat-mile. There may be a vast difference. A. 32-seater coach, for example, costing is. 4d. per mile to run is being operated for id. per seat-mile. It is also being operated for id. per passenger-mile if the seats be always full, but if, on the average, the bus be filled to only half its capacity, the average cost per passenger mile is Id. That is a matter which must be borne in mind in estimating possible profits from the operation of passenger vehicles.

The figures for the operaiing cost of hire cars appear independently. In the near future these are likely to attain added significance, in view of the fact that many long-distance-coach operators are considering the use of seven-seater vehicles on those services, so that they may exceed the limit of 30 mph. for coaches. . One more point : In assessing the costs of these vehicles in accordance with seating capacity, the .normal type of vehicle has been assumed. There has arisen of late a tendency to 'employ seats fewer in number than the normal capacity of the chassis and body, so that passengers may be given greater comfort. Obviously if a 26-seater coach -be made to do duty as a 14-seater it may not be anticipated that the cost of operation will diminish in proportion. It may be slightly less than that of the average for a 26-seater, but will certainly be considerably more than that for a 14-seater. S.T.R.