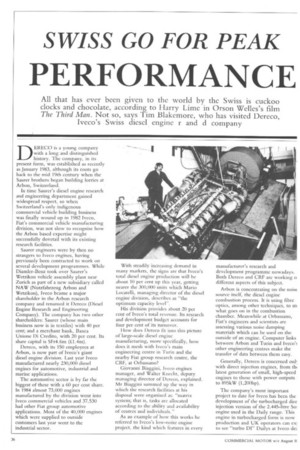 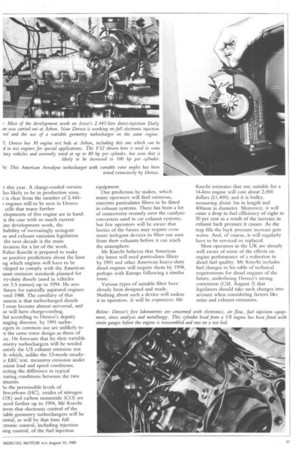 All that has ever been given to the world by the Swiss is cuckoo clocks and chocolate, according to Harry Lime in Orson Welles's film The Third Man. Not so, says Tim Blakemore, who has visited Dereco, Iveco's Swiss diesel engine r and d company DERECO is a young company with a long and distinguished history. The company, in its present form, was established as recently as January 1983, although its roots go back to the mid 19th century when the Saurer brothers began building lorries at Arbon, Switzerland.

In time Saurer's diesel engine research and engineering department gained widespread respect, so when Switzerland's only indigenous commercial vehicle building business was finally wound up in 1982 Iveco, Fiat's commercial vehicle manufacturing division, was not slow to recognise how the Arbon based expertise might successfully dovetail with its existing research facilities.

Saurer engineers were by then no strangers to Iveco engines, having previously been contracted to work on several development programmes. While Diamler-Benz took over Saurer's Wetzikon vehicle assembly plant near Zurich as part of a new subsidiary called NAW (Nutzfahrzeug Arbon and Wetzikon), Iveco bcame a major shareholder in the Arbon research company and renamed it Dereco (Diesel Engine Research and Engineering Company). The company has two other shareholders: Saurer (whose main business now is in textiles) with 40 per cent; and a merchant bank, Banca Unione Di Credito, with 20 per cent. Its share capital is SFr4.6m (11.4m).

The automotive sector is by far the biggest of these with a 60 per cent share. In 1984 almost 73,000 engines manufactured by the division went into Iveco commercial vehicles and 37,530 had other Fiat group automotive applications. Most of the 40,000 engines which were supplied to outside customers last year went to the industrial sector. With steadily increasing demand in many markets, the signs are that Iveco's total diesel engine production will be about 10 per cent up this year, getting nearer the 300,000 units which Mario Locatelli, managing director of the diesel engine division, describes as the optimum capacity level".

His division provides about 20 per cent of Iveco's total revenue. Its research and development budget accounts for four per cent of its turnover.

I-low does Dereco fit into this picture of large-scale diesel engine manufacturing, more specifically, how does it mesh with Iveco's main engineering centre in Turin and the nearby Fiat group research centre, the CRF, at Orbassano?

Giovanni Biaggini, Iveco engines manager, and Walter Knecht, deputy managing director of Dereco, explained. Mr Biaggini summed up the way in which the research facilities at his disposal were organised as: "matrix system; that is, tasks are allocated according to the ability and availability of centres and individuals."

As an example of how this works he referred to Iveco's low-noise engine project, the kind which features in every manufacturer's research and development programme nowadays. Both Dereco and CM' arc working o different aspects of this subject.

Arbon is concentrating on the noisc source itself, the diesel engine combustion process. It is using fibre optics, among other techniques, to sti what goes on in the combustion chamber. Meanwhile at Orbassano, Fiat's engineers and scientists are assessing various noise damping materials which can be used on the outside of an engine. Computer links between Arbon and Turin and Iveco'5 other engineering centres make the transfer of data between them easy.

Generally, Dereco is concerned on!, with direct injection engines, from thi latest generation of small, high-speed engines to those with power outputs to 895kW (1,200hp).

The company's most important project to date for Iveco has been the development of the turbocharged dire injection version of the 2.445-litre So: engine used in the Daily range. This engine in turbocharged form is now production and UK operators can exj to see "turbo DI" Dailys at Iveco de r this year. A charge-cooled version Iso likely to be in production soon. t is clear from the number of 2.445 engines still to be seen in Dereco cells that many further 'elopments of this engine arc in hand. is the case with so much current ;ine development work, the bability of increasingly stringent se and exhaust emission legislation the next decade is the main tivation for a lot of the work. /alter Knecht is prepared to make [le positive predictions about the lines rig which engines will have to be 'eloped to comply with the American taust emission standards planned for vy-duty diesels (used in vehicles ive 3.5 tonnes) up to 1994. He sees future for naturally aspirated engines 'and 1988. The corollary of that ument is that turbocharged diesels I soon become almost universal, and ,st will have charge-cooling.

3ut according to Dereco's deputy naging director, by 1991 turborgers in common use are unlikely to ,e the same rotor design as those of .ay. He forecasts that by then variable imetry turbochargers will be needed satisfy the US exhaust emission test :le which, unlike the 13-mode steady:e EEC test, measures emission under asicnt load and speed conditions, lecting the difference in typical 'rating conditions between the two Itinents.

ks the permissible levels of irocarbons (HC), oxides of nitrogen DX) and carbon monoxide (CO) are uced further up to 1994, Mr Knecht ieves that electronic control of the iable geometry turbochargers will be ential, as will by that time full :ironic control, including injection Ling control, of the fuel injection equipment.

One prediction he makes, which many operators will find ominous, concerns particulates filters to be fitted in exhaust systems. There has been a lot of controversy recently over the catalytic converters used in car exhaust systems, but few operators will be aware that lorries of the future may require even more inelegant devices to filter out soot from their exhausts before it can reach the atmosphere.

Mr Knecht believes that American city buses will need particulates filters by 1991 and other American heavy-duty diesel engines will require them by 1994, perhaps with Europe following a similar route.

Various types of suitable filter have already been designed and made. Nothing about such a device will endear it to operators. It will be expensive: Mr Knecht estimates that one suitable for a 14-litre engine will cost about 2,000 dollars (i1,400); and it is bulky, tneasuring about lm in length and 400mm in diameter. Moreover, it will cause a drop in fuel efficiency of eight to 20 per cent as a result of the increase in exhaust back pressure it causes. As the trap fills the back pressure increase gets worse. And, of course, it will regularly have to be serviced or replaced.

Most operators in the UK are already well aware of some of the effects on engine performance of a reduction in diesel fuel quality. Mr Knecht includes fuel changes in his table of technical requirements for diesel engines of the future, underlining Dereco's strong contention (CM, August 3) that legislators should take such changes into account when considering factors like noise and exhaust emissions.